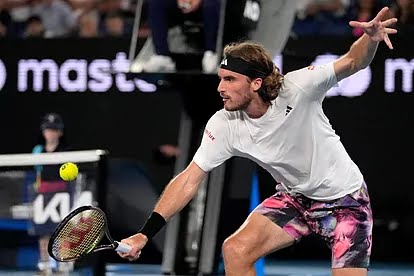 Stefanos Tsitsipas closed in on a first Grand Slam title by reaching the Australian Open semi-finals on Tuesday in impressive fashion, as Victoria Azarenka also powered into the last four.

Tsitsipas was a convincing 6-3, 7-6 (7/2), 6-4 winner over unseeded Jiri Lehecka of the Czech Republic and faces Karen Khachanov next.

The 24-year-old Tsitsipas is the highest remaining seed left at three and with Melbourne’s large Greek community roaring him on, his title charge is gathering pace.

“I’m feeling great with my tennis. I don’t think I felt so good in a long time,” said Tsitsipas, after making the Australian Open semi-finals for a fourth time.

“I’m a different player, playing different. My mentality is different.”

Tsitsipas, who will become world number one should he win the title, was pretty much in control throughout against the 71st-ranked Lehecka.

But he did lose his cool at one point in the third set, smacking the ball into the wall after losing a point as a ball boy went to collect it nearby.

“What I did, definitely I’m not happy about that. I shouldn’t have done it,” Tsitsipas said about the incident.

Victoria Azarenka showed glimpses of the form that took her to the 2012 and 2013 Australian Open titles with a vintage display to reach the semi-finals on Tuesday.

However, American Sebastian Korda’s dreams of emulating his famous father ended in pain.

Azarenka earned a measure of redemption for being dumped out in the opening round by Jessica Pegula in 2021, to dismantle the in-form American third seed 6-4 6-1.

She reached the last four at Melbourne Park for the first time in a decade.

“We had so many rallies and I wanted to try to stay there, take opportunities because she was going to take everything if I don’t try to win myself.

The 33-year-old Belarusian said that it was “nerve-wracking” to compete in front of Australian great, Rod Laver, on the main show court named in his honour.

“I feel like you want to show your best tennis in front of the best, and I hope I did that and you guys enjoyed watching me because I really tried my best,” she said.

Korda also tried his best to continue playing against Karen Khachanov, but threw in the towel in their quarter-final contest while trailing 7-6(5) 6-3 3-0 due to a wrist injury.

Khachanov, who had also reached the last four of the 2022 U.S. Open, said it felt great to be back in a Grand Slam semi-final after reinventing himself.

“Obviously not the way you want to finish a match,” said the 18th seed, who will meet third seed Stefanos Tsitsipas for a place in the final.

“I think until a certain point, it was very competitive, very good battle.

“Sebastian beat one of my friends Daniil Medvedev in three sets and Hubert Hurkacz in five sets I guess, he was playing great tennis.

“I’m feeling really good, to be honest, really happy with my level and how I compete and I’m looking forward to the semi-finals here in Australia the first time.”

The Kazakh 22nd seed beating Jelena Ostapenko 6-2 6-4 in a match that was played under the roof after a rain shower halted play.

She said: “I’m super happy to be in the semi-finals for the first time.”

“Of course, I was nervous, particularly in the last game, but I’m happy I managed my emotions. I played really well today,” she added.

Having started her campaign on one of the outer courts at this year’s championship, Rybakina was every bit the star on Rod Laver Arena with a dominant display.

She sent down 11 aces to quell 2017 Roland Garros champion Ostapenko, and will take on Azarenka next.