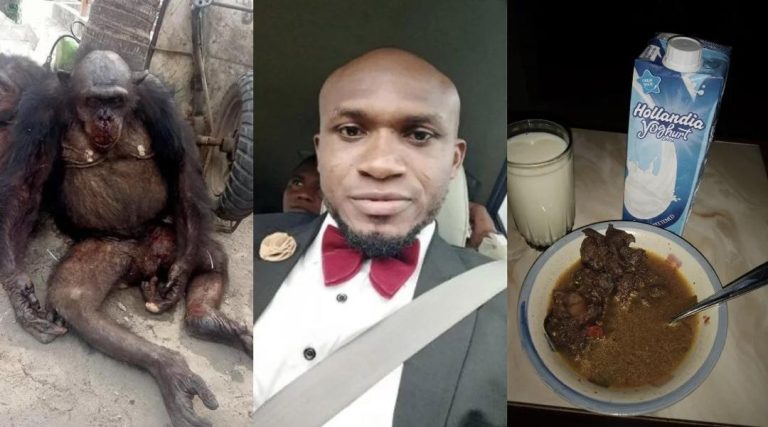 ENUGU, Nigeria (VOICE OF NAIJA)- Arimieye Thomas, an internet journalist, has since come under attack after he revealed that he ate a chimpanzee in Bayelsa State.

The journalist took to his Twitter page to reveal that he had killed a chimp.

He wrote: “The chimp had been gunned down by a hunter.”

Thomas went on to share photos of the creature and the meal he made of it afterwards.

After his write up, Nigerians accused him of practicing pseudo cannibalism as chimps are regarded as cousins of humans due to near DNAs.

They also pointed out that it was an endangered species and shouldn’t have been killed off and called on Environmentalists to protect endangered creatures.

Thomas wrote: “Gunned down by a hunter in the forest today at Nembe, Bayelsa State. A good meal.”

Reacting, @venusaking wrote: “They’re not even scared of contracting rare disease or something. This is barbaric!”

@khanofkhans11_, while reacting to the post, also said: “You see something that looks 90% like you and you kill it to eat? You can eat humans.”

Reacting also, Deborah Tolu-Kolawole GenZ said: “chimps are our closest living relatives. A recent study proved that Humans and chimpanzees have very similar DNA sequence. We have been found to share at least 98% of our DNA.”

Also, @odunolamini wrote: “You just eat what could turn you to a millionaire, use am for osole make everything biza.”