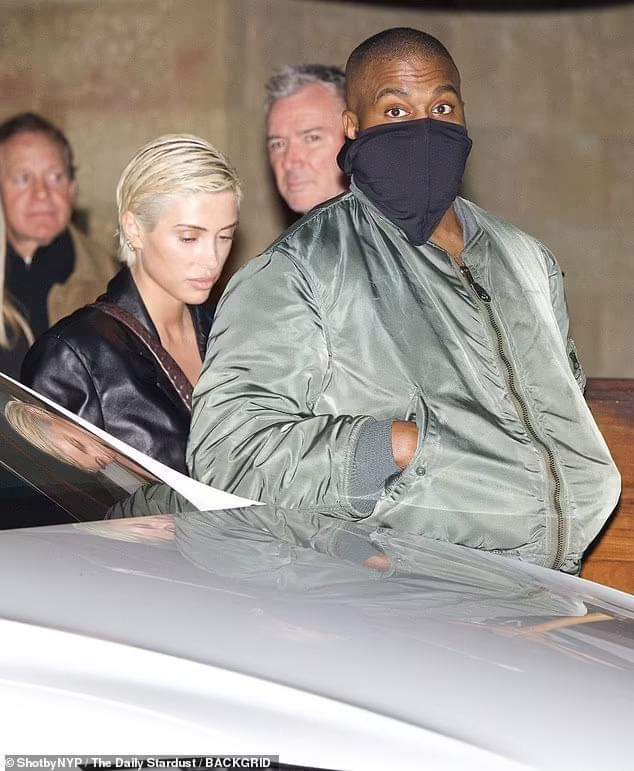 American rapper, Kanye West popularly known as Ye, took his daughter, North West, to dinner with himself and his new wife, Bianca Censori.

North was joined by a friend as her security team dropped her off at the high-end restaurant where the 45-year-old rapper and his 27-year-old wife, were waiting for her to arrive.

The fashion entrepreneur married the Australia-native in a secret wedding sometime in January and has kept the details of their relationship private, despite releasing a song recently titled ‘Censori Overload’.

According to UK Daily Mail on Monday, the newlyweds arrived at the restaurant with Kanye wearing what looked like a wedding band.

This report emerged days after Kim Kardashian, his ex-wife allegedly planned to fix a meeting with West’s new wife and new stepmom of her kids, Bianca Censori.

The reality TV star has concerns regarding her children, North Saint, Chicago, and Psalm, whom she shares with the rapper, a source told The Sun.

“She’s sent a message through her team to Kanye’s team, basically saying congratulations, and given that it looks like Bianca may soon becoming a stepmom to the kids, she would like to have a sit down to get to know her in a private meeting,” the insider said.

Kim wants to set some ground rules with the Yeezy designer for when she’ll spend time with her kids including guides on care, food, electronics, and naps.

“She already has started to vet her, which is standard for anyone that comes into contact with her children and will have access to them,” the source said.

The outlet further shared that despite Kim wishing to meet Bianca, she is still “furious” with Kanye, who now goes by Ye, for his double standards.

She is reportedly upset with him for publically humiliating her ex-boyfriend Pete Davidson for spending time with their children.

Their marriage comes after Ye and Kim Kardashian finally settled their divorce in November 2022. Kanye and Kim share four children.