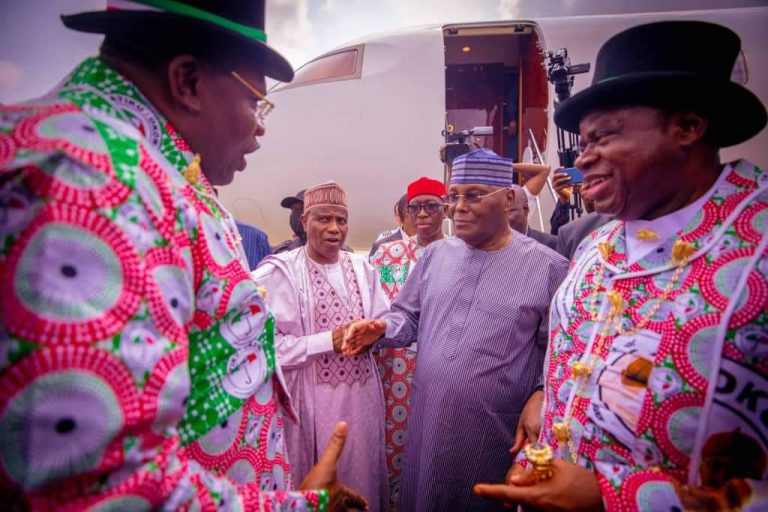 The presidential candidate of the Peoples Democratic Party (PDP), Atiku Abubakar, has restated his plan to restructure the country, during the latest leg of his presidential campaign, in Yenagoa, Bayelsa State capital.

He vowed to ensure the devolution of more resources and power to the region to make them less reliant on the federal government.

Taking to Facebook on Monday, the former Vice-President shared photos from the outing alongside a caption: “Before proceeding to the venue of our rally in Yenagoa, I held a meeting with members of the Bayelsa State Council of Traditional Rulers. It was an excellent opportunity to confer with their Royal Highnesses. On behalf of my team, I want to extend a special appreciation to the Chairman of the Council, Ibenanaowei of Ekpetiama Kingdom, King Bubaraye Dakolo, Agada IV, for his warm reception and blessings. -AA”

The former vice president stressed the need for the people of the State to remain in the PDP, which he said provided for the state all that it presently has.

Atiku said he joined the race to have the opportunity to unify the country as he asserted it had been divided along various fault lines.

He said: “I want to remind you since the beginning of democracy, Bayelsa has been PDP and PDP has been Bayelsa. Everything you see in Bayelsa today was provided by the PDP government, everything. Therefore, I am calling on you, the people of Bayelsa not to leave PDP, don’t make the mistake of leaving PDP.

“You have provided governors, and a president and you are going to provide many more. So, the future of Nigeria and Bayelsa is tired of PDP.

“I want to appeal to you, you have listened to my programs. I said I am committed to implementing five key programs in this country starting from the unification of this country.

“The reason why I want to unify the country is that we have never been this divided along a number of faultlines either North-South or Muslims and Christians.

“I am going to give every part of this country a sense of belonging in the next PDP government. I promise to tackle Insecurity. Here in Bayelsa State, you have faced a number of security challenges, and you have lost so many people, due to breach of law and order. I promise I will restore security in this country.

“I also said I am going to tackle the economy of this country. If you recall, the PDP government between 1999 and 2015, had the best economy in Africa, but the APC has pushed us back and brought us down.

We promised that we are going to tackle the economy and make sure that we provide jobs and other opportunities for our young men and women to be gainfully employed either in the private sector or public sector.

“Again, we promised that we would never see any more ASUU strikes, we would devote a lot of resources to education to make sure that our young men and women are educated and they continue to go to school without any interruption.

“Finally, we propose to restructure this country. You people in the Niger Delta need more restructuring than any other part of this country. We would give you more resources and power to deal with your problems. You don’t need to always beg the federal government for everything when you are actually producing the resources of the country.

“So, we will devolve more power and resources to you in the Niger Delta.

“These are the key areas of our developmental programs. I appeal for your support and understanding, and cooperation so that we can achieve all these goals.”

In his address, PDP National Chairman, Iyorchia Ayu, reminded the supporters that every Nigerian is suffering under the ruling All Progressives Congress (APC), pledging that PDP will rectify the wrongs when it returns to power.

He said that the main opposition party can relate to the problem of the people of Bayelsa including their travails over the recent flood disaster.

Ayu said while he visited the state with the presidential candidate of the party to commiserate with them, the federal government ignored them.

He expressed delight that those who had left the PDP including four members of the State House of Assembly, to join the APC have returned to the opposition party.

The party boss stated: “We are happy that since we started this journey in 1999, Bayelsa State has always backed the PDP, from our first governor the revered governor Alamieyeseigha to governor Dickson and today and today to a performing governor who cared for his people, governor Diri.

“I am happy to say that in all presidential elections, Bayelsa has always voted for PDP. You promised to vote for PDP and PDP promised to look after your welfare.

“I was here with our presidential candidate when nearly all of Bayelsa was underwater. We know your problems, and we will stand by you. The federal government didn’t even care to come to send anybody to see how the people of Bayelsa were suffering. Some of your mothers and old fathers were swept away by water. Nobody cared for you.

“The PDP, when we take power, will seat with you and discuss all those things that make Bayelsa not develop. Do not abandon this party. This is the party of the people and with the people, we shall stand by. It is because of that a few made the mistake of voting for the other party.

“Let me tell you, if you vote for them they will always disappoint you. Is rice not 50-something thousand now? Have they not disappointed you? Everybody in this country is suffering. We need to come back to power and continue doing what we know how to do best, developing our people, and looking after those issues that touch them.

“And therefore, I am happy to hear that the few remnants that went to the other party have decided to come back to the PDP. Four members of the House of Representatives and thousands of their supporters.”

Also speaking, the Director-General of the PDP Presidential Campaign Council and Sokoto State governor, Aminu Tambuwal, stressed that the former vice president is very serious about the question of restructuring.

He said when the PDP government implements the initiative, there will be a better Nigeria where life is more meaningful to all.

Tambuwal stated: “The last president produced by PDP was from Bayelsa State. It is time for Bayelsans to appreciate the PDP again by coming out en mass to vote for all the candidates of the PDP, in February and in March.

In contribution, the vice presidential candidate of the PDP and governor of Delta State, Ifeanyi Okowa, urged the people of the state to come out in their numbers to vote for PDP.

“This time, we want to come out with the vote that will make Nigerians respect the South-South.

“This is the best opportunity we have as a party to reclaim the presidency and I am sure that Bayelsa is ready. Go out there and ensure that you deliver a minimum of 700,000 votes I know that in the South-South geopolitical zone, we are committed to delivering a minimum of 5 million votes and I know that it is doable. We must work to deliver that quantum of votes.

“I know that with Atiku Abubakar and your son Sen. Ifeanyi Okowa and other well-meaning Nigerians, we will be able to change the story of Nigeria.