My Father Molested Me For Years, Locked Me Up When I Was 14 – Nigerian Lady Shares Abusive Story 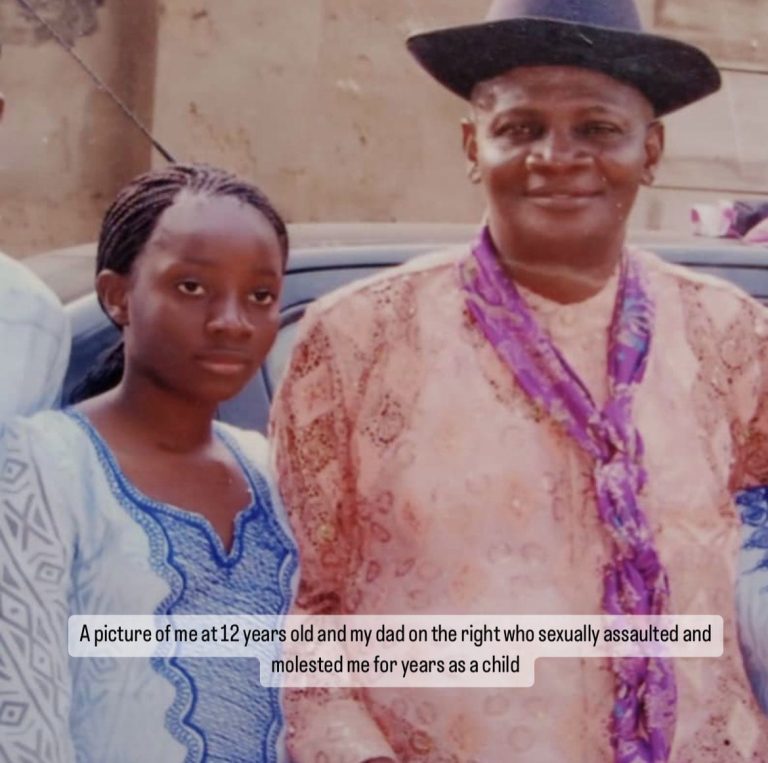 IBADAN, Nigeria (VOICE OF NAIJA) – A young Nigerian lady named Zayla Odell has taken to Twitter to share the horrific abuse meted on her by her parents.

According to the young lady identified as @justsotired on Twitter, her father has been molesting her physically, mentally, sexually and financially since she was a child.

Zayla said her father broke her in many ways and she battled depression for years.

She shared a picture of herself when she was just 12 and her dad who molested her for years.

Sharing her story, she said: “The year I told everyone he was touching me. My life got worse cause my dad hit me for every slightest opportunity he got.💔

“You can see how sad I was here. I hated taking pictures or being around him. No family or relative could relate to my pain. This man hurt and broke me in ways I didn’t ask for. This period he beat me so much almost every day. Was also the period he locked me in the cell…

“He would wipe his shoes with a tissue paper and put in my food. When he also locked me up in a cell I was a teenager and I slept on cold smelly concrete urine,mosquito and feces infested cell room. He told everyone I was possessed and lying against him….

“Please google what detention cells look like in west Africa. Yes I had to do that for almost a week and they beat me with a police baton till my skin pulled and tore. This was my dad’s wish. I was just 14. Like why would any father do this? Why would my mum not protect me?”

She shared pictures of where her father made her sleep.

Zayla Odell said she reported her dad to the Police for “molesting me and my dad came to the station, bribed them and called me a lying possessed child.”

“This is how my cell looked like at 14. I had gone to report my dad for molesting me and my dad came to the station, bribed them and called me a lying possessed child. I was locked in here I had to scoop urine with a bucket every morning for almost a week. I was just 14.💔,” she continued.

“My body felt like a crater cause of all the mosquitoe bites. Sleeping on that bare concrete floor. My mum coming to the cell and standing by the gate to tell me “good for me and I deserve it since I wanted to lock her own husband up”. How ridiculous! I hate her for’ver.

“@NigerianPolice this is the floor you let a minor like me sleep on. I was 14. Reported my dad for molesting me but Y’ll took bribe and locked me up asides from inflicting bodily harm on me with your baton. I hate Y’ll so much and wish you bad.

“My dad won’t go to jail. I won’t get justice. I’m in West Africa. They don’t care if a girl child is molested especially by her father. No active child laws. Nothing! Everyone,relatives the church tells you to get over it. Yes I can’t count how many people have said this to me!”

The tweep shared a picture of herself at age 18/19, adding that she was depressed and couldn’t function well at the university.

She said she eventually had to drop out of school because her father kept demanding sex from her before paying her school fees.

“Was about 18/19 here and so depressed I couldn’t function well at university cause I cried everyday. Plus my dad asking me to come have sexual intercourse with him in a hotel or else he won’t pay my fees yes I dropped out. I ran far away from my hometown and I went through hell.

“My dad called me skinny and said I looked like a dog. He was first Person to body shame me. His argument whenever I fought back and told everyone that he molested me. My dad will say“you are an ugly dog,I didn’t molest ur sisters so how can you lie I touched an ugly dog like u”💔

Zayla also shared another picture of herself few years later and said: ” I was depressed here as well.but only difference I had eaten and gotten fat. No one saw it cause I try to be happy outside. My dad saw me and called me fat and ugly and said I looked like I had given birth to 5 kids and I’ve aborted a lot. That I’m a liar he never touched me.

Reacting to her story, a tweep @planetofjaj shared a screenshot of an anonymous who said he or she always have sympathy with abusive moms.

See the screenshot below:

Commenting on the post, Zayla said: “I used to make this excuse for my mum and abusive mothers but NO! They deserve same treatment as males who abuse. Do I feel pity for them ? Yes ! Have they had their own share of abuse ? Yes but will I forgive her for invalidating me? NO!”

Another tweep, @SharikaSoal84 said: “Race loyalty to Black men is killing black women and trapping them in oppression.

“Someone tell my mum. She adores rapist. Even paid bail for her rapist brother to be freed. Also said it’s okay Atleast my dad didn’t force himself on me so why she’s okay with what’s happened to me in the past 🚮,” @justsotired reacted.

She stated further that she is so thankful for her siblings that have never for once invalidated her the same way adults do.

“I’m so so thankful for my siblings. I’m thankful that even if they are so young they’ve never for once invalidated me same way adults have. The happiness I get from the fact they hate my father and mum as much as me even if they didn’t get molested by my dad.I love them 🥺💜

“Idk they are literally the best thing I have in life. When I was opening the gofundme and I told them I’ll tell my story they were so supportive. They said they hope it comes together and even if they can’t come with me I can leave first(but I don’t wanna leave them behind tho).

“My siblings are 19,14,11. Don’t even know what I’d do without them. They are so smart and kind. The fact they understand everything that happened to me in same house. Fact they didn’t act blind even when they saw the abuse and got treated better than me. I love them soooo much.”

In another tweet posted hours after sharing her story, Zayla wrote: “Like as a girl child, my mum would watch my feet get broken just so I can look attractive enough for a man? Let’s not get started with the FGM(female genital mutilation, although wasn’t a beauty standard but purity culture just to prove that a girl was worth marrying etc?

“I’m so glad I never wanna have kids but if I ever did….. I hope that women can get free from the misogyny and patriachy. And women/mothers with internalized misogyny can let that go. You are hurting your daughters and what for ? Male validation that don’t even mean shit!

She went on to slam her mother for her wrong choice in males.

“My problem is my mum’s glorification of males. Her wrong choice in males. And her obsession with them. This man she’s dating is way younger than her. My mum is getting to 50 and he’s like 29/30. He has kids he don’t take care and my mum pays all his bills.”

She went on to share the photo of her mother’s young lover.

“I and my immediate younger sister she’s (19) were speaking about how we noticed our mum is very jealous of us. I thought I was the only one who noticed.

“When I came home I got my siblings lots of stuffs and couldn’t buy or give my mum any money cause she was giving it to the Young male she’s dating. Yes she started cheating on my dad with this man since 2016. She treats both my dad who molested me and this man who has a baby mama and two kids better than she treats us. (This male abandoned his kids while living off my mum’s money).

“I hate all the excuses I made for my mum all these years. She’s just as terrible as my pedophile father. Do I fault her for cheating ? Hell NO! Cause she started cheating as payback to my dad cause my dad cheats on her with every girl and Woman he sees.

“But my problem is the money and love my mum shows this two retarded males in her life(my dad and her side piece) she’s never shown I And my siblings. So her being jealous when I came home and showered my siblings with gift and barely gave her anything showed all her jealousy.

“Hello mum, are you there ? Wanna let you know you are the dumbest person alive. And I would never give you a dime or gift ever again in my life. All the times I worked and sent cash to my mum for her and my siblings. She took it and gave to this broke ugly male.”

A GoFundMe has been opened on her behalf by someone she called her benefactor, Sarah Cobbinah.

The aim is to raise $50,000 for herself and three siblings to ensure they have a better life.