I Got Pregnant Thrice For Apostle Suleman, The Last One Got Me Bleeding – Actress Halima Abubakar 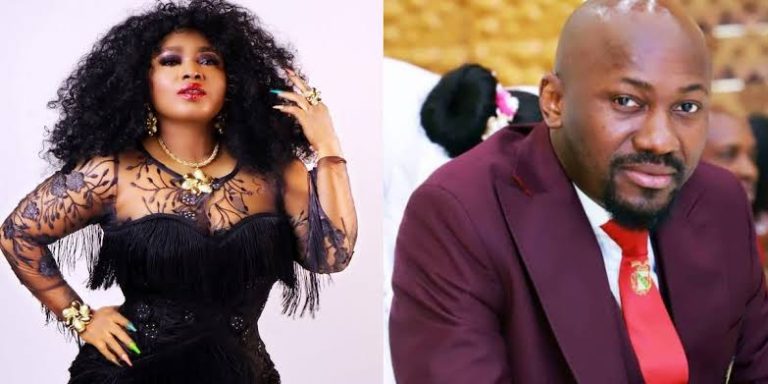 She alleged that she was pregnant on three occasions for Apostle Johnson Suleman, the general overseer of Omega Fire Ministries International.

Recall that in September 2022, the actress alleged that she had called out the cleric and claimed that she had an affair with him because he told her he was a divorcee with three children.

Halima also accused the cleric of reneging on his promise to marry her and being behind an undisclosed life-threatening ailment that had plagued her for years.

Reacting to the series of allegations, Suleman sued Halima in court.

In the suit filed before a high court sitting in Abuja, Suleman demanded, among other things, the sum of one billion naira as damages.

“A declaration that the statements published by the defendant against the claimant on her Instagram handle @Halmabubakar, falsely and maliciously written and published to the general public, are defamatory of the person of the claimant,” it read.

However, in a new Instagram live video with Comedian Princess, the film star claimed the pair dated for “six years”.

Halima alleged that Suleman proposed to her more than seven times during their relationship and met her parents for introduction.

“I did not know he was married. He told me he was separated. I used to beg him to go and settle with his wife but he said No. He proposed to me more than seven times. He involved my parents and met them for introduction,” she alleged.

The actress also said when rumours of their alleged affair first started making the rounds, she sought the cleric’s advice on what to say but “he told me to go and die”.

In a now-viral clip of the interview, Halima was asked if she was ever pregnant for Suleman.

“Yes, I was once pregnant for him,” she said.

When further asked why she did not keep the pregnancy, she said: “When I lost the baby, he was crying, you would think it’s real because he was shedding tears that I lost his child.

“It’s crazy. I got pregnant three times for him. The last one got me bleeding…I had to take tablets to stop it…”

On how long it took the bleeding to stop, she replied “for four years, I actually just came out since I have been in a long spiritual battle…the blood just stopped rushing, you won’t believe it.”

In another clip from the interview, Halima alleged that the cleric slept with her while she was bleeding.

“He was sleeping with me even while I was bleeding. That’s the dangerous part of it, and he was telling me he couldn’t sleep with any other person, that’s why,” she added.

“The whole thing took me unaware because I was naive and not a spiritual person. Even when I’m on my period, he does that (sleeps with me).”

Halima said she is ready to go to court to prove that the pair had an affair.