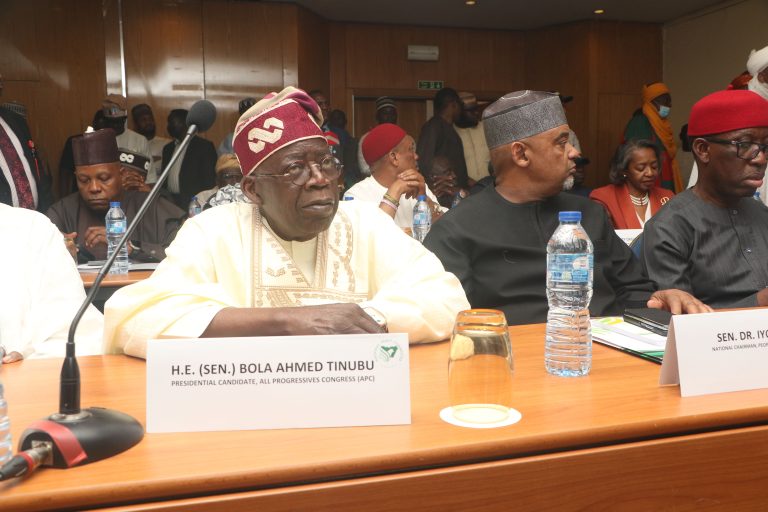 The committee met with the leadership of the 18 registered political parties and their presidential candidates.

Tinubu and Sowore were among those who attended the meeting that the National Peace Committee under the leadership of Gen Abdulsalami Abubakar (rtd) organized in Abuja on Friday.

According to Abdulsalami, the meeting was organized to ensure proper conduct of the candidates, their parties and other stakeholders, especially during the campaigns ahead of the elections.

“We just returned from a meeting of party leaders/Presidential candidates with the national peace committee in Abuja, the Presidential candidate of The ⁦@OfficialAPCNg⁩ ⁦@officialABAT⁩ slept through the meeting, he didn’t say a word. His party chair spoke on his behalf,” Sowore tweeted.

Meanwhile, Sowore created a scene by protesting over the sitting arrangement, threatening to walk out on the committee and other candidates.

He threatened to remain standing or leave the meeting if the NPC did not give assurance that there would not be a repeat of such.

“The sitting arrangement should have been alphabetical, I note that this same thing happened at the ICC during the signing of the peace accord and this is not fair,” he had said.

Gen. Abdulsalami who assured that his position was noted, however, said that Sowore could leave if he was not still satisfied.

Another drama ensued when Gen. Abdulsalami said that they forgot to say a prayer before proceeding with the meeting, and asked Sowore to do that, leading to applause and laughter.