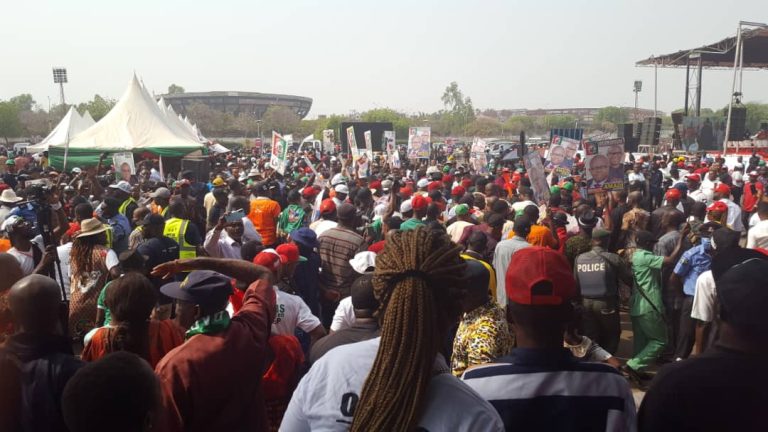 ENUGU, Nigeria (VOICE OF NAIJA)- The residents of Enugu State have come out en mass in solidarity to show their support and love for Mr. Peter Obi, the presidential candidate of the Labour Party (LP), ahead of the 25 February election.

Some of the supporters who spoke with our correspondent said they came to the Micheal Okpara Square for the love they have for the former Anambra State Governor, stressing that they were not paid to be here.

Unlike the low turn up Wednesday for the presidential rally of All Progressives Congress (APC), candidate Bola Ahmed Tinubu, the residents of Enugu State came out in their thousands on Thursday to welcome Obi.

Voiceofnaija.ng had reported that those who showed up for APC presidential candidate on Wednesday said they were paid to come, adding that on the election day, they will vote their right choice of candidate.

According to one of the supporters, “I came from Nkanu West, Enugu State for the presidential campaign of Bola Tinubu.

“Asking me if I want to vote for Tinubu is not important. See, the person I want to vote is in my mind. It does not mean I will tell you who I will vote for.

“I am just here for the campaign purposes and money involved and also to see what is happening. at the rally ground.”

One of the ‘Obidients’ told voiceofnaija.ng that Peter Obi will win the 2023 presidential election.

A youth who gave his name as Chibuzor expressed hope that Obi will emerge winner because the political game has changed.

He said: “The political game has changed. Something positive is going to turn up.

When asked why Obi is his choice of candidate, Chibuzor said: “Personally, I am tired of Nigeria, I swear, I swear.”

Also, another supporter who gave his name as Buchi Freeman, in joyful mood said he came to welcome his principal, Mr. Obi.

“I am here to welcome my principal, It is an under statement to ask if Peter Obi will win the presidential election.

“Peter Obi is going to win the election. Some people are waiting to rig the election. And I am just advising Nigerians to go and collect their PVCs. Your PVC is your bullet.”

Answering whether Ndigbo will vote for Peter Obi, he said: “How many time will Peter Obi tell you that he is not in this race because of Ndigbo. He is in this rave because of Nigerians.”