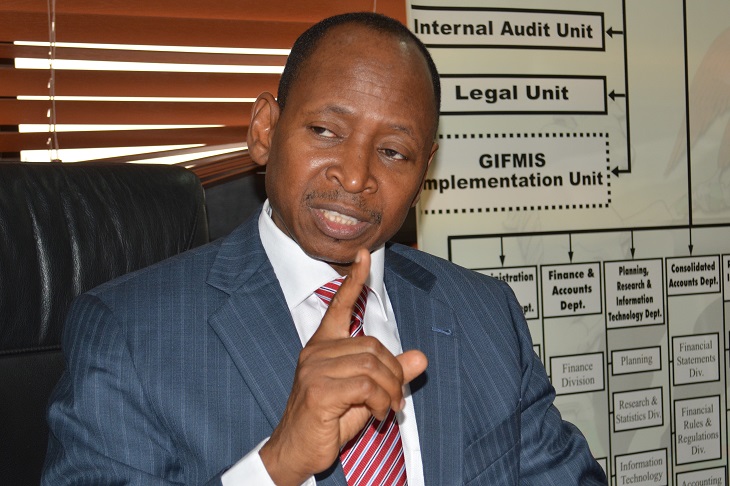 Ahmed Idris, the suspended Accountant-General of the Federation, has voluntarily returned $899,900 cash.

Hayatudeen Ahmed, an official of the Economic and Financial Crimes Commission (EFCC), stated this in a High Court sitting in FCT.

According to TheNation, the EFCC official said this on Wednesday while appearing as a witness during the proceedings at the high court in the federal capital territory (FCT).

Ahmed, who testified as the first prosecution witness, was led in evidence by Rotimi Jacobs, counsel to the EFCC.

The witness said the returned cash was part of the public funds allegedly diverted by Idris.

In May, TheCable had reported how Idris was arrested in Kano after he failed to respond to invitations by the EFCC to answer questions over the allegation of N80 billion fraud.

Hours later, Idris was suspended, and in July, he was arraigned on a 14-count charge alongside Godfrey Olusegun Akindele, Mohammed Kudu Usman, and a firm — Gezawa Commodity Market and Exchange Limited.

“After the petition was assigned to our team, investigation commenced. We wrote to banks, the Corporate Affairs Commission (CAC) and other government agencies,” Ahmed said.

“From analysis of bank documents received, we discovered that a Baita Kura of B.I. Kura Enterprises, a bureau de change operator, made several deposits of money amounting to N280 million between 2019 and 2021 into the account of the fourth defendant – Gezawa Commodity Market and Exchange Ltd.

“We discovered that the payments made were on the instruction of the first defendant. We also discovered from other bank statements analysis that a certain architect Mustapha Muktar of Marcs and Construction Ltd received various sums from Baita Kura, amounting to about N866 million.

“Based on this, we invited architect Mustapha, who gave statement and explained that the money he received from Baita were on the instruction of the first defendant.”

“It was discovered further that this agitation was tabled before the Post-mortem sub-committee of the Federation Account Allocation Committee (FAAC),” the EFCC witness said.

“The committee deliberated on the request and came up with a figure of about $2.2 billion as what was due to the nine oil-producing states. And, that deductions for this payment would be made over a 60-month period.

“A total of 11.5 percent of the total sum, which is equivalent N84.7 billion, was set aside as facilitation for some public officials to approve and release the request. This was done under the guise of consultancy.”

Ahmed said the services of Olusegun Akindele & Co, a firm belonging to the second defendant, was used for this purpose.

“The account of Olusegun Akindele & Co received the cumulative sum of N84.3 billion, representing 9.8 percent, less taxes from the 11.5 percent that was set aside earlier,” the EFCC witness said.

“He received the money in his First Bank account, from the FAAC withheld Escrow account, under the control of the first and third defendants (Idris and Usman).”

“The bulk of the N32 billion was recovered from the first, second and third groups. The sum of about N3 billion was traced to the construction of the commodity market at Gezawa Town, Kano, from funds received by the first defendant from the second and fifth groups.

“N504 million was also traced to the reconstruction of Alikhlas Supermarket also known as Kano City Mall, belonging to the first defendant, located at Mandarin area of Kano.

“$900,000 less $100 was recovered from the first defendant himself, who returned same voluntarily. He returned it in cash, which has been received and registered as exhibit in this case by the commission.”