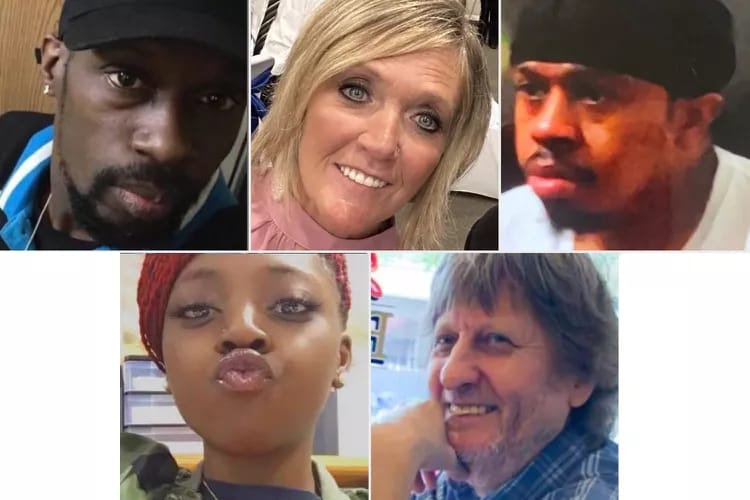 The suspect, who shot multiple people and later killed himself, has been identified by Walmart as 31-year-old Andre Bing.

Authorities in Chesapeake, Virginia, have also identified the victims who died after a Walmart manager opened fire in a break room on Tuesday night.

The City of Chesapeake shared the names and photos of five of the victims on Wednesday, noting that the sixth person killed was a 16-year-old boy whose identity will not be publicized due to his age.

Five people were also injured, with one being released from Sentara Norfolk General Hospital on Wednesday evening. Two people are still in critical condition, per Norfolk, Virginia’s 13 News Now.

Voiceofnaija.ng had reported on Wednesday that seven people were shot dead on Tuesday night at a Walmart in Chesapeake, Virginia.

The incident is said to be second high-profile mass shooting in the United States in three days.

According to witnesses at the scene, one of the managers entered the break room and started shooting at people inside the Sam’s Circle Walmart, located just off Battlefield Boulevard, at around 10.10pm on Tuesday night.

The number of people deceased or injured was not earlier revealed by the police, but it was however announced that the shooter is dead.

“We believe it’s a single shooter, and that shooter is deceased at this time,” Leo Kosinski, a spokesman with the Chesapeake Police Department, said in a brief news conference.

According to police, the shooting happened inside the Walmart. One person was found deceased outside the store, he said.

Photos and videos from the scene of the Walmart shooting showed officers huddling around the entrance of the building, with numerous police vehicles parked in the large lot of the store. A large inflatable Santa Claus stood outside the store.

In a latest update on the incident, Michelle Johnson, said that her late son Brain Pendleton “had a real big heart,” while speaking with ABC News via phone.

“Anybody that wanted to laugh, or just want company, he’d buy you lunch. He’d buy you anything in a minute,” she added.

Pendleton, who was a custodian at the grocery chain for more than a decade, “loved his job” Johnson recalled. “He was just a hard worker and a good kid.”

She opened up about the moment she found out about the deadly shooting through a family friend. Her husband immediately went to the area where families were waiting to hear updates about their loved ones. Johnson’s husband was informed that Pendleton had been taken to Norfolk General Hospital, where Johnson and her husband quickly headed.

Becoming emotional, she explained to ABC News: “We waited, and then the police came out with a nurse and they took us to a side room and that’s when they told us that he didn’t make it.

Johnson shared that she and Pendleton, who was set to celebrate his birthday on Dec. 2, both had congenital hydrocephalus.

“We’re fighters, and we trust the Lord,” she said, stating that she and Pendleton were “blessed” to not have suffered from serious cases.

“I don’t understand why, what happened, happened,” she said. “I will never go near that Walmart again.”

Authorities told reporters that the events began shortly after 10:00 p.m. on Tuesday night and that the suspect also died at the scene. In a Wednesday morning press conference, authorities said that the gunman, who was unidentified at the time, died of a self-inflicted gunshot wound. He used a pistol in the shooting, police say.

“I looked up and my manager just opened the door and he just opened fire,” Walmart employee Briana Tyler told ABC’s Good Morning America Wednesday. “He just started shooting throughout the entire break room. I watched multiple people drop down to the floor, whether they were ducking for cover or they were hit.”

The manager looked her way, fired, but missed.

“He looked directly at me,” she said. “But luckily he missed my head by an inch or two.”

Tyler said he didn’t say anything during the shooting.

“I would have never thought he would do something like this,” she said. “Absolutely not.”