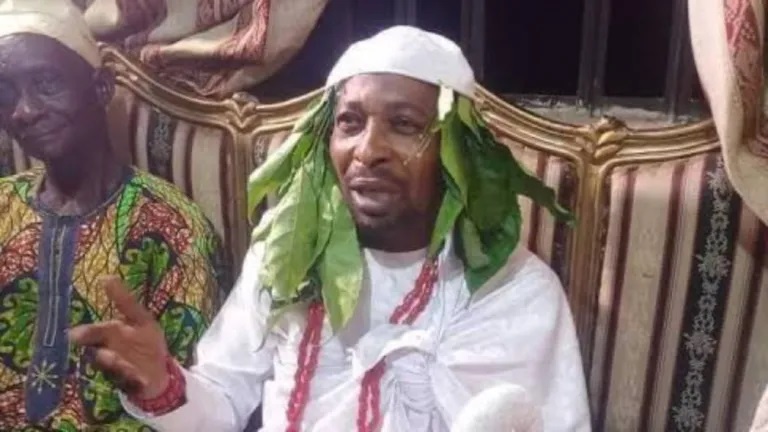 There was unrest in Osun State on Wednesday, after policemen allegedly shot a prince, Lukman Olatunji, to death during a scuffle at the entrance to the Akinrun of Ikirun palace, in the Ikirun area of the State.

No fewer than four other persons reportedly sustained bullet wounds when policemen invaded the premises of the palace.

Angered by the development, youths in the community set a building in the palace ablaze and residents scampered to safety due to the tension in the area.

Narrating how the incident happened, a resident in the community, Gboyega Adebayo, said he was on his way to purchase something in the area when he saw policemen storming the palace, adding that a stray bullet from one of the policemen claimed the life of the prince.

It was gathered that the palace had been locked since the new Akinrun of Ikirun, Oba Olalekan Akadiri, became the monarch of the town.

In a bid to enable the monarch gain entry into the palace, the armed policemen reportedly stormed the premises to open it.

The situation created unrest as the policemen, while opening fire to scare hoodlums protesting against their action in the community, allegedly shot Olatunji dead.

He said: “I was on my way to the Oja-Oba area to buy an herbal product. I saw four policemen walking towards the palace. Few minutes later, two vehicles carrying more policemen arrived at the scene.

“They started firing teargas and gunshots into the air around the palace gate. Everyone near the premises ran in different directions to avoid being shot. It was a bullet from their gun that hit a man’s (Olatunji) head. He died on the spot.

“The policemen then brought a welder to help them open the locked gate of the palace. They (police) were shooting to scare people away. Bullets also hit about four other people. Those ones are not dead yet.”

Olatunji’s elder brother, Tajudeen Gboleru, during a telephone conversation with The Punch correspondent, said the policemen were attempting to enter the palace when they shot his brother dead, adding that someone led the policemen to the palace.

He said: “A person trying to enter the palace came to the area with a lot of policemen and soldiers. One of the security men must have fired the shot that hit him.”

It was gathered that men of the state Fire Service were alerted to put out the fire but the angry mob attacked them with charms.

The mob also vandalized the fire truck as the firemen fled the scene for their safety.

However, three firemen reportedly sustained varying degrees of injury and were rushed to hospital for treatment.

The spokesperson for Fire Service in the state, Ibrahim Adekunle, confirmed the attack on the firemen.

“They attacked our men. Three of them are still in the hospital receiving treatment. Our fire truck was also vandalised. Our men had to abandon it and run to safety after they were attacked. It was the police that invited us to put out the fire and the mob attacked us,” Adekunle said.

Reacting to the development, the state Police Public Relations Officer, Yemisi Opalola, denied killing the deceased, adding that the policemen visited the palace to protect those renovating the building.

Opalola said: “The Commissioner of Police wishes to debunk the news making the rounds that policemen shot at people in Ikirun.

“The true picture of the event is that, while some policemen were at Akinrun palace to protect those renovating it, some armed hoodlums shot at the policemen mobilised to the palace, injuring one Inspector, Obajobi Adedokun and Inspector Raji Abiodun.

“They were rushed to hospital for treatment. They (hoodlums) set the palace ablaze and also attacked the fire brigade personnel and injured one Orunwumi Roseline and Abel Olayinka and attacked their truck while on their way to the palace to put out the fire.

“The CP, therefore, charged parents and guardians to warn their wards to stop this uncivilized act of violence and toe the path of peace. He sternly warned that, anyone found culpable in this unwarranted violence/attack will face the full wrath of the law.”