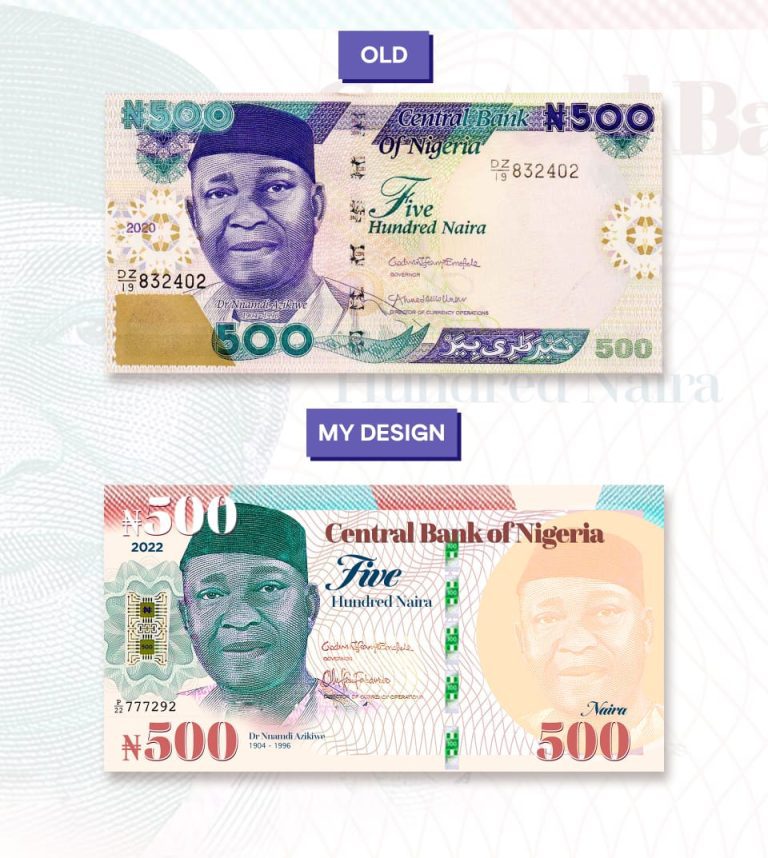 IBADAN, Nigeria (VOICE OF NAIJA) – The Naira design shared by a young tech entrepreneur, identified as Fisayo Fosudo, @Fosudo, on Twitter, has been trending on social media since the unveiling of the currency redesign on Wednesday.

Fielding questions from newsmen after the event, CBN Governor, Godwin Emefiele, said the CBN is fully poised to make Nigeria a cashless economy.

However, a lot of Nigerians were disappointed with the new naira notes which went viral few hours ago with some wondering if the old naira notes were dyed to produce the new ones.

While Nigerians were still trying to wrap their heads around the new naira notes which will be in circulation in January, Fosudo shared his own design of the currency.

According to the young Nigerian, he was playing around in Photoshop and came up with it in an hour and 30 mins.

He tweeted: “I was playing around in Photoshop and came up with this in an hour and 30 mins.

“I took inspiration from the 100 Naira note and copied the security chipset on the 50 pound note and added custom guilloche patterns.”

Fosudo’s design has since gone viral with many Nigerians praising him for achieving what the Federal Government failed to accomplish with N218billion.

However, some were displeased with his removal of the Arabian inscription on the new naira notes while others praised him for it.

A tweep, @Uncle_Wali said: “Then Arabic Inscription removed. This shows the kind of person you are. Bigoted, Tribalistic and Hypocrite. If truly your work comes within the depths of intellectuality, then out of sheer respect you won’t mind putting the Arabic.
Shame on you!!!!”

“If you are not bigoted and every other things you called him, why not ask @cenbank why “Opon Ifa” and the “Cross” are not included in the Naira note, since everything must be twisted to religion issue. @Fosudo beautiful and brilliant design by the way.👏🏽👏🏽,” @ArabinrinRakeli replied @Uncle_Wali

@iambigswag said: “You see why we are not supposed to share same country with you cows.”

Fosudo reacted to the backlash by apologizing for the “unintentional” mistake.

He tweeted: “DISCLAIMER: “This design was 90 minutes of putting a few random things together as an experiment. I missed the Arabic inscription unintentionally but it has caused a stir. The design is obviously NOT REAL. Thanks for understanding.”

@madebycharles slammed those trolling the tech entrepreneur. He said: “People’s problem is the Arabic sign he “unintentionally missed”??

@Jamiu_BIN_Ladin said: “Arabic is just a language, if there should be any language on the notes it should be the 3 most spoken Nigerian language (hausa,Igbo,yoruba) appreciate the good design and move on… T for thanks 👍”

@tayoainafilms wrote: “Responses to this tweet shows where we are really at with our mindset in Nigeria. Simple design idea they have turned it to Arabic or non Arabic inscriptions.

“If you don’t like his design, go and do your own!

“We are terrible as a people. Forget politics. Nigerians are terrible people. And then we wonder where the mischevious politicians emerge from,” @ifesinachiLeo drag tweeps against Fosudo’s design due to the removal of Arabic inscription.

A tweep, @Nkemchor_ said: “This design is sooo Good. You also removed that Arabic inscription. Nigeria is not an Islamic state but a secular state. Tomorrow someone will tweet again that Nigerians are Islamphobic smh”

“Is Nigeria a Christian State since English is inscribed on the Naira Notes and, in case you have forgotten, Christianity was introduced to Nigeria from England?,” another tweep Joshua Omeiza queried @Nkemchor_

@m2k_fun who preferred Fosudo’s design to that of CBN said: “Is it just me, or does any other person see that this design of his, is far more better than the bleached one we were served lately?

“This is beautiful. Kudos to you for your great work.”

STRONG KPOMO blasted tweeps criticizing Fosudo for removing the Arabic inscription on the new naira notes from his design.

He said: “Why are they fuming in the quotes and comments It’s just an Arabic inscription, nothing more 🤦🏽‍♂️Shows where we are as a country. Everything must be about tribe/ language or religion”

“I’ll tell you this for free: Stick to unboxing and discussing mobile phones and their features. Don’t dabble into areas far beyond your niche that you lack the capacity for. E get why.”