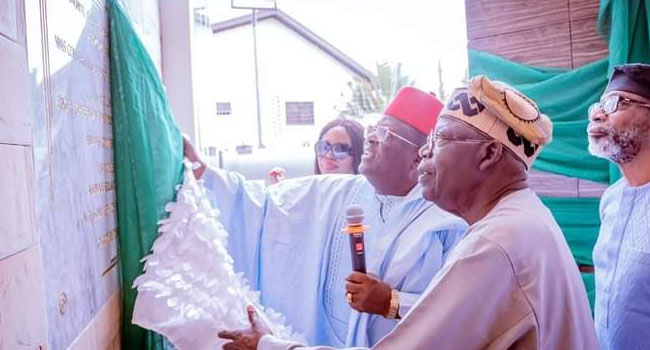 They gave the promise through Eze Charles Mkpuma, the Chairman of Ebonyi Traditional Rulers Council, during a town hall meeting on Wednesday night with Tinubu at the new Ebonyi State Executive Chambers, Ochudo Centenary City, Abakaliki.

They also appealed to the APC presidential candidate to zone the Senate President position to Ebonyi when he emerges President.

Tinubu is in Ebonyi on to flag off his presidential campaign on Thursday, (today).

Eze Mkpuma wished the presidential candidate success in his aspiration, assuring him of the people’s support.

He said: “We congratulate our incoming President, Asiwaju Ahmed Bola Tinubu, for your success in the just concluded Presidential Primary, our people are happy with you that you are here to see us even though we had resolved to support you and other Candidates of APC.”

Mkpuma, who is also the Chairman of the South-East Traditional Rulers Council, urged the APC presidential candidate to consider zoning the Senate Presidential slot to Ebonyi State when he becomes president in 2023.

Addressing the stakeholders, Tinubu urged the South-East to strengthen the bond of friendship between them and South West by supporting his ambition.

He assured the people that they would be carried along in his administration if elected.

Tinubu, a former Lagos State Governor, promised to develop the country to renew the hope of Nigerians and guarantee the future for generations yet unborn.

He assured that he would keep to his promise to develop all facets of the country.

“He appreciated the Governor and the APC governorship candidate, Speaker Francis Nwifuru for their support to his candidacy and assured that he would repay their solidarity.

“You can be an Engineer ten times over but if don’t love your people, you may not develop your house not to talk of the State.

“When we entered this Executive Council Chambers, one would think we are in the United Nations, this is a product of intelligence and ingenuity,” he said.

On his part, Umahi thanked Tinubu and President Muhammadu Buhari for their support to Ebonyi State.

He said his administration is ready to continue to deliver the goods to the people until he successfully anchors the ship in 2023.

Vote PDP At All Levels Except Presidency; We’ll Decide Who You Will Vote For – Wike To Rivers Residents