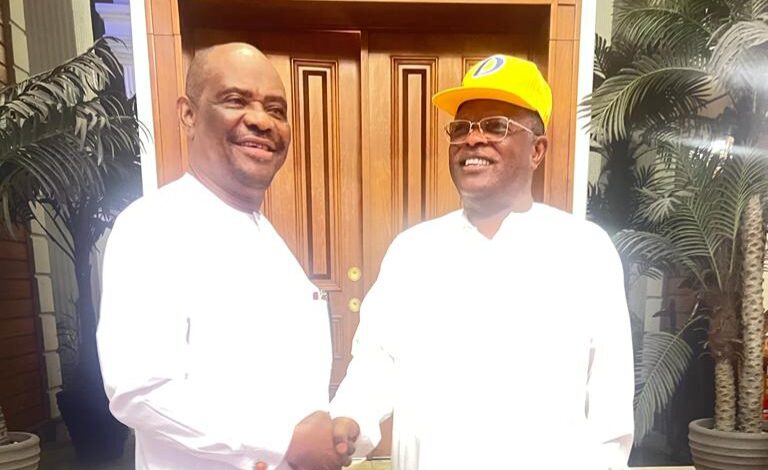 ENUGU, Nigeria (VOICE OF NAIJA)- The Governor of Ebonyi State, Dave Umahi, of the All Progressives Congress (APC), has declared his membership with the G5-Governors.

The G5 is a group of five Peoples Democratic Party (PDP) Governors, and is also referred to as the ‘Integrity Group’.

The Governors include; Okezie Ikpeazu of Abia State, Ifeanyi Ugwuanyi of Enugu State, Samuel Ortom of Benue, Seyi Makinde of Oyo, and Nyesom Wike of Rivers who is also the leader of the group.

The G5 was formed amid crisis in the PDP over calls for Iyorchia Ayu to step down as National Chairman of the party.

Apart from the five Governors, the group also comprises PDP stakeholders who have insisted that Ayu has to step down on the grounds that the chairman and presidential candidate cannot be from the same region.

In his address on Tuesday during the inauguration of a road project in Rivers, Umahi made a reference to Wike’s criticism of him and other Governors who defected from PDP to APC.

Umahi, the Chairman of the South-East governorship forum, however, said he supports the position of the G5 and declared himself a member.

“Our country must see wisdom in what you’re doing. Your fight is not personal; you’re fighting to keep this country together. And God is with you. I want to assure you that I have your back, I have your front; we are with you and we are united in this.

“But today, you know those Governors you wanted to remove or were in the process of removing before you softpedalled, we have formed G4 — that’s Governor Wike, myself, Cross River, and Zamfara. There is another G4.

“And G5 is hereby expanded to G6. I’m now a member of G6. And your excellency, let me tell you something, I’m not going to struggle chairman with you. But for deputy, nobody will take it from me.

“So, this ‘Integrity Group’, when you call the meeting, you have to call me. Many other governors want to be part of this, because they have seen that there is salvation for our country in what you are doing. And so, I want to commend you highly.”