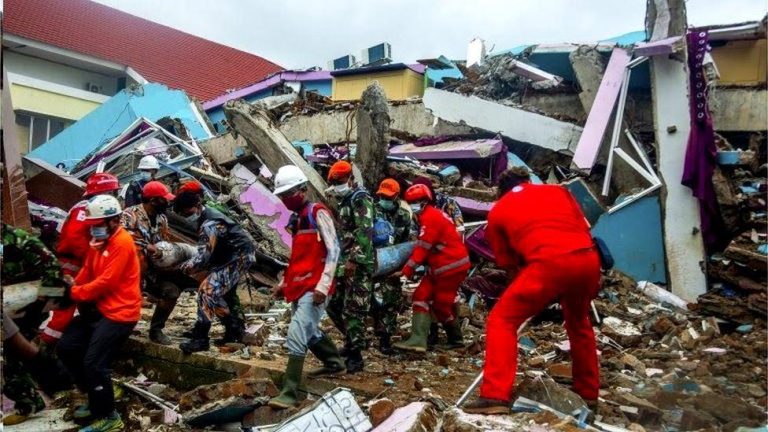 The 5.6 magnitude earthquake on Indonesia’s main island of Java has left 268 dead and hundreds injured as buildings crumbled and terrified residents ran for their lives.

Bodies continued to be pulled from the debris on Tuesday morning in the hardest-hit city of Cianjur, located in the country’s most densely populated province of West Java and some 135 miles south of the capital, Jakarta.

As body bags emerged from crumpled buildings in Indonesia’s most populous province, West Java, rescue efforts turned to any survivors still under debris in areas made hard to reach by the mass of obstacles thrown onto the roads by the quake.

The epicentre of the shallow 5.6-magnitude quake on Monday was near the town of Cianjur where most of the victims were killed, hundreds were injured and dozens feared trapped as buildings collapsed and landslides were triggered.

The death toll jumped dramatically again later on Tuesday from 162 to 268, Suharyanto, the head of Indonesia’s national disaster mitigation agency, or BNPB, told a press conference.

At least 151 people remain missing and more than 1,000 have been injured, said the official, who like many Indonesians goes by one name.

“The focus is still on the search and evacuation of victims. That’s the priority,” he said. “When the emergency response ends, hopefully everyone has been found.”

At a burial in a village near Cianjur, relatives of 48-year-old victim Husein, who was killed while building a house when the quake struck, broke into hysterical wails before his body was lowered into the ground.

“I just lost a brother 10 days ago. Now I’ve lost another brother,” said his sister Siti Rohmah as she sobbed uncontrollably.

“I kept waiting, hoping he would survive and that nothing bad would happen to him.”

One of the dozens of rescuers, 34-year-old Dimas Reviansyah, said teams were using chainsaws and excavators to break through piles of felled trees and debris to find survivors.

“I haven’t slept at all since yesterday, but I must keep going because there are victims who have not been found,” he said.

Drone footage taken by AFP showed the extent of a quake-triggered landslide where a wall of brown earth was only punctuated by workers using heavy machinery to clear a road.

President Joko Widodo visited the area on Tuesday, offering compensation for victims and ordering disaster and rescue agencies to “mobilise their personnel”.

‘State of shock’
Many of those killed were children, according to the head of Indonesia’s national rescue agency Basarnas.

“They were at school, at 1 pm, they were still studying,” Henri Alfiandi told a press conference.

Some of those dead were students at an Islamic boarding school, while others were killed in their homes when roofs and walls caved in on them.

The search operation on Tuesday was made more challenging because of severed road links and temporary power outages in parts of the largely rural, mountainous region.

Those who survived camped outside in near-total darkness surrounded by fallen debris, shattered glass and chunks of concrete.

Doctors treated patients outdoors at makeshift wards after the quake, which was felt as far away as the capital Jakarta.

One father carried his dead son wrapped in white cloth through the streets of his village near Cianjur.

Others searched for their missing relatives in the chaos.

Rahmi Leonita’s father was riding a motorbike to Cianjur when the quake struck.

“His phone is not active. I am in a state of shock now. I am very worried but I am still hopeful,” said the 38-year-old, tears falling down her face as she spoke.

‘Nothing I could save’
At a shelter in Ciherang village near Cianjur, evacuees sat on tarpaulins stretched over the cold morning ground.

Nunung, a 37-year-old woman, had pulled herself and her 12-year-old son out of the rubble of their collapsed home.

“I had to free us by digging. Nothing is left, there is nothing I could save,” she told AFP from the shelter, her face covered in dried blood.

The devastation caused by the quake was made worse by a wave of 62 smaller aftershocks that relentlessly shook Cianjur, a town of about 175,000 people.

The Geological Agency of the Indonesian Ministry of Energy and Mineral Resources said in an analysis posted online Monday that the soil make-up of the area could have exacerbated the impact of the quake.

It said the area’s “undulating to steep hills” were made up of “weathered” and “young” volcanic debris.

“These… deposits are generally soft, loose, unconsolidated and strengthen the effects of shocks, making them prone to earthquakes,” it said.

Indonesia experiences frequent seismic and volcanic activity due to its position on the Pacific “Ring of Fire”, where tectonic plates collide.