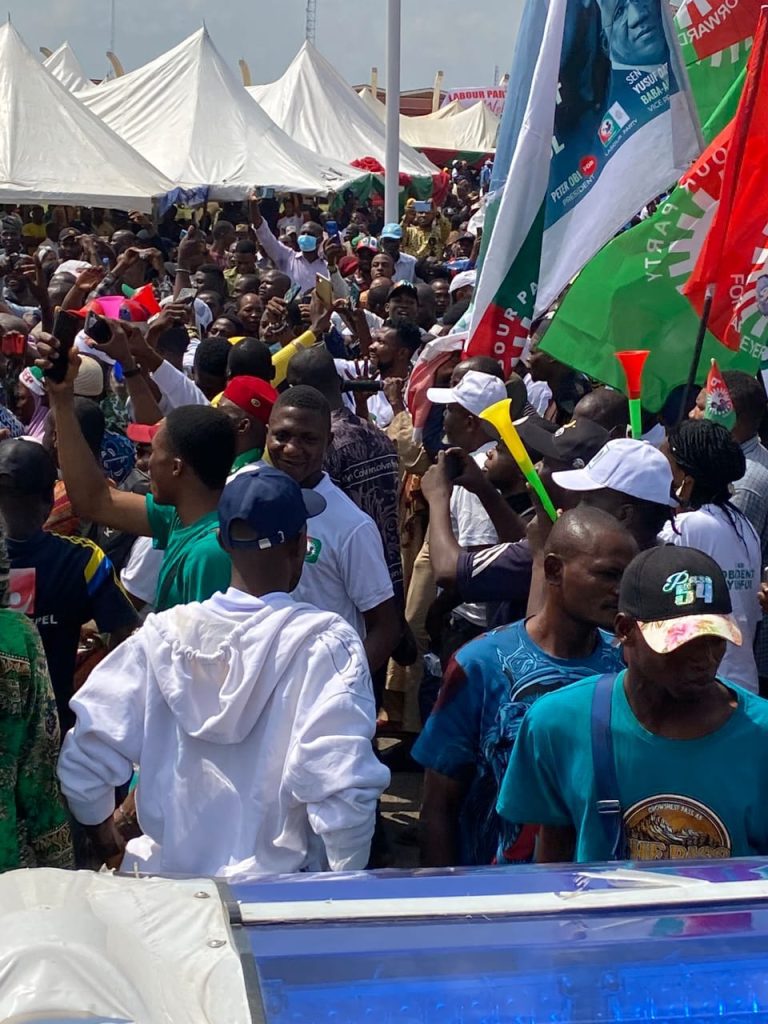 Supporters of the candidates were seen on the main road in the capital city waving banners and clad in the party’s customized shirts, caps, and other paraphernalia.

The security in and around Adamasingba stadium, the venue of the rally, is also watertight as supporters of the party form a single queue outside the stadium before being screened into the main event area.

The mood is ecstatic, music playing in the background, as supporters await the arrival of the candidate and his running mate.

Meanwhile, the Labour Party (LP) campaign organization has debunked the rumours that the plane meant to convey Peter Obi and other party chieftains to the Oyo state rally was impounded.

The LP said the plane it was meant to take for a rally in Oyo state was grounded by the “powers that be”.

Peter Obi, and his entourage were heading to Ibadan, from the Nnamdi Azikiwe International Airport in Abuja when the incident happened.

Diran Onifade, head of media for the LP campaign, in a statement on Wednesday, said the Obidient plane was grounded for “regulatory reasons” and not impounded, has some media outlets have reported.

Onifade asked supporters of the LP to ignore “mischievous rumours” suggesting the plane had been impounded.

He said the party’s scheduled rally in Ibadan will proceed as planned.

“The Obidient plane was grounded today by the powers that be “for regulatory reasons” only. Please ignore any mischievous rumour. Our massive rally in Ibadan is going on as planned,” the statement reads.

Obi is one of the leading candidates for the 2023 presidential election alongside Atiku Abubakar of the Peoples Democratic Party (PDP) and Bola Tinubu of the All Progressives Congress (APC).