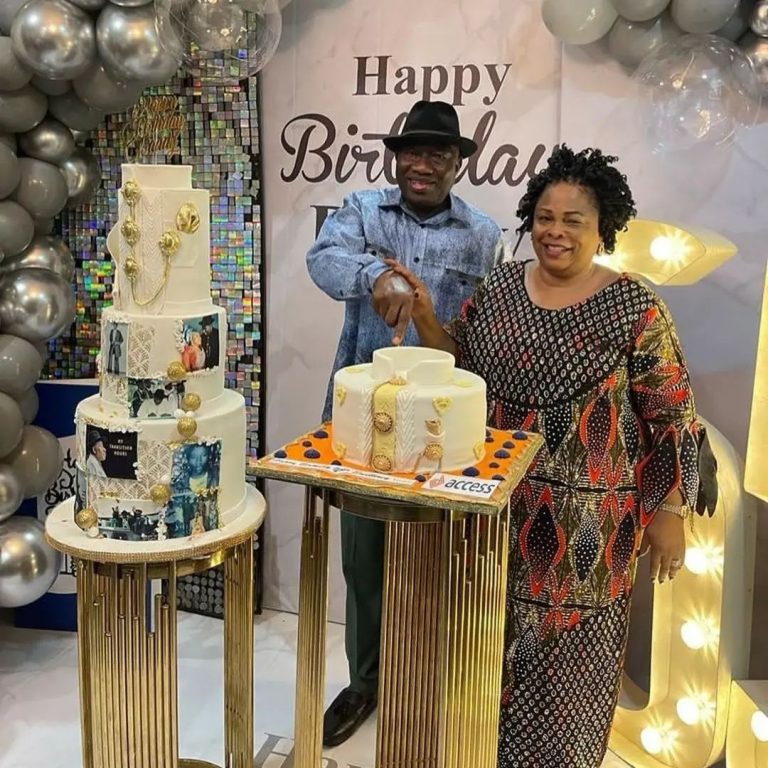 In celebration of his day, Jonathan’s family organized a low-key party for him where his son-in-law, Prince Godswill Edward shared photos from the celebration.

He referred to the former Nigerian President as a “role model”.

He holds Bachelors, Masters and Doctorate degrees in Zoology, Hydrobiology and Fisheries Biology respectively; all obtained from the University of Port Harcourt, Rivers State, Nigeria.

Before joining politics, Dr. Jonathan served as a Science Inspector of Education, a lecturer, and later as an Assistant Director of the Directorate of Environmental Protection and Pollution Control in the defunct Oil Mineral Producing Areas Development Commission (now Niger Delta Development Commission).

He served in that capacity from 1999-2005, where his innate traits of humility, service, and loyalty received public notice. Afterward, he became the acting, and later, the substantive Governor of Bayelsa State from 2005-2007.

In 2011, he contested and was elected as Nigeria’s President.

He peacefully handed over to the present administration in May 2015.

As President, he promoted democratic values and principles, peace and national security.

Dr. Jonathan made major contributions to the political, economic and social development of Nigeria through his Transformation Agenda.

He vigorously pursued his commitment to change the global negative perceptions of the Nigerian elections by reforming the electoral process to establish a culture of non-violent, free, fair, and credible elections.

He further promoted democratization through the observance of the rule of law, enactment of the Freedom of Information Act, electoral reforms and non-interference in electoral outcomes.

Dr. Jonathan promoted social advancement through gender inclusion and equity and expanded access to education through the establishment and expansion of specialized and tertiary institutions.

He grew the economy to be the largest in Africa with a GDP of over half a trillion dollars.

He worked with his colleagues particularly Heads of States in the ECOWAS to resolve the political crisis and stabilize democracies in the sub-region and Africa especially in countries like Cote d’Ivoire, Niger, Guinea Bissau, Mali, Liberia, Sierra Leone, Benin Republic, Burkina Faso and Togo.

His commitment and passion towards bringing peace and stability to Africa within his five-year tenure gave Nigeria more recognition in the United Nations Security Council. Nigeria was nominated twice, a feat very rarely achieved by non-permanent members of the UN Security Council.

Dr. Jonathan was also given the highest national honour by several African Presidents of their countries equivalent to the GCFR in Nigeria for his commitment to stabilizing democracy in the ECOWAS.

Since leaving office in 2015, Dr. Goodluck Jonathan has remained totally committed to promoting democracy, credible elections, peace and respect for the rule of law in Africa.

He is the Chairman of the Goodluck Jonathan Foundation, an organization he founded to promote best practices in democracy, peace and prosperity in Africa.

In 2019, he emerged Chairperson of the African Chapter of the International Summit Council for Peace (ISCP), an association of serving and former Presidents who are jointly working to bring peace, stability and economic prosperity to the world.

In May 2020, he was appointed as a Member of the Kofi Annan Foundation Electoral Integrity Initiative Senior Panel.

Given his position as the former President of the Federal Republic of Nigeria and the great roles and contributions his administration offered to the maintenance of peace, security and stability in ECOWAS region.

In July 2020, he was appointed as the ECOWAS Special Envoy to Mali with the mandate of restoring peace and democracy in the country.

In December 2020, he was invited by the Government of the Gambia to lead the process of dialogue for a new constitution for the Country.

Dr. Goodluck Jonathan was recently nominated as a member of the ECOWAS Council of the Wise (CoW).

In and out of office, Dr Jonathan has received several local and international awards, in recognition of his exceptional public service and commitment to peace, democracy and good governance on the continent.