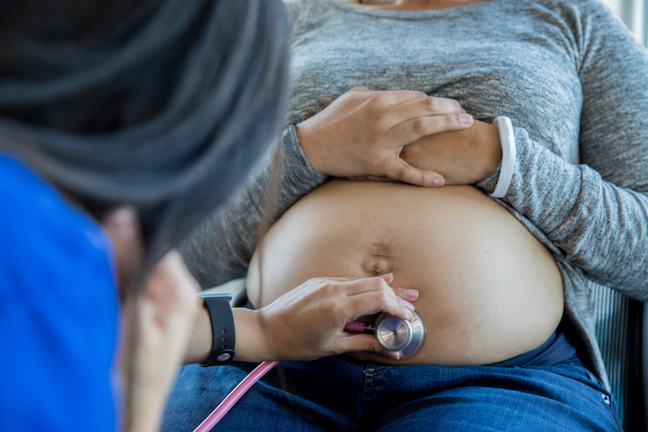 IBADAN, Nigeria (VOICE OF NAIJA) – ‘Pregnant’ is trending on Twitter on Thursday, after a man caught his pregnant wife on their matrimonial bed with a pastor.

The man shared video of the moment he caught his naked wife having sex with the cleric who was also naked.

Fetish items such as calabash, gourd, red and black material, burning candles and what looks like a pot can be seen in the centre of the room.

The woman could be seen crying while the pastor struggled to wear his boxer to cover his nakedness.

The video shared on Twitter has caused uproar on the social media platform, with many tweeps shocked to see a pregnant woman cheating.

Below is the video:

A tweep, @alliycruiselord said the woman was not at fault because the pastor probably lied to her to commit such atrocity in order to deliver safely.

The tweep said: “To be honest the pregnant woman is not at fault, I blame her for not seeking for an advice, but I think she believes in what she shouldn’t have believed in, if you investigate very well you will see maybe the Alfa or Pastor lied to her about safety deliver.”

@geminibrub who was baffled by the video trending on Twitter asked how a man could be attracted to a pregnant woman.

@bjhjunior, like many other tweeps, wanted to know the woman’s reason for sleeping with the cleric.

“What’s even the point of having to do this ? Whatever the purpose is it’s still very disgusting and the ritualist/pastor should be ashamed of himself for coaxing this poor pregnant woman into an act that disgraces herself and her marriage.”

“The Fact that The Word “Shege” starts with “She”, You should know there is something About that Gender 🌚….FEAR WOMEN,” @DefavouredHP said, while reacting to the viral video.

@MaameAmaDoma wrote: “Being pregnant and sleeping with another man is just witchcraft. And if you’re able to sleep with someone’s pregnant wife you’re just a mad man.”

@Tee_Classiquem1 said there no was way the man that caught his wife cheating on their matrimonial bed can ever trust her again.

“Take it or leave it but there is no way that man that caught his pregnant wife cheating on their matrimonial bed can ever trust or be committed to any woman again in his life, experience like this is what turned a lot of innocent men out there to the demons they are today.”

Another tweep, @jon_d_doe condemned the man for sharing the video online.

He said: “I saw a video of a man who caught his pregnant wife cheating on their matrimonial bed & she was naked.

“I can’t imagine how he feels, but that type of video should never have found its way online.

“He only needed it as evidence.”

@ellyserwaaa, on her part, said both men and women are not good as both genders cheat.

“Men are crying like they don’t cheat on their pregnant wives too. Both men and women are not good people. Fear both genders 🤝”