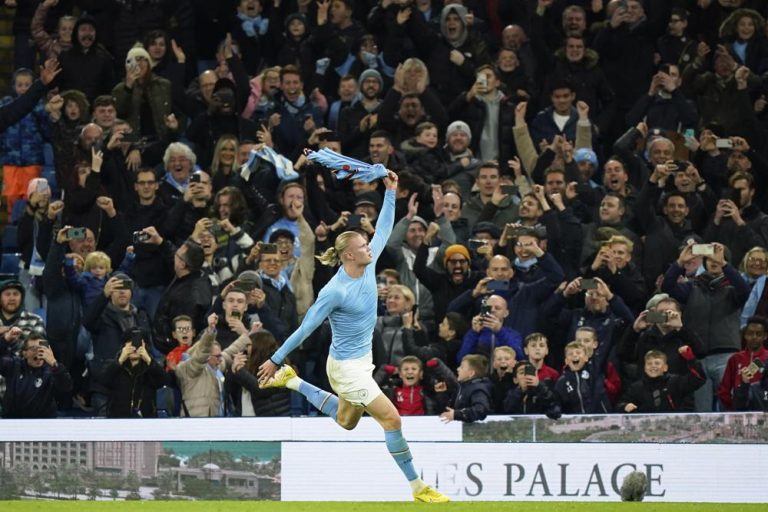 Manchester City’s victory against Fulham on Saturday, sparked huge celebrations inside the Etihad Stadium on a day when the Citizens were set to be frustrated by their well-organized opponent.

Erling Haaland came off the bench to send 10-man Manchester City to the top of the Premier League with a 2-1 win against Fulham on Saturday.

Haaland was brought on as a 64th-minute substitute, with the Premier League champions struggling to find the winner.

He had the ball in the net when heading home a Kevin De Bruyne cross from close range, only for the effort to be ruled out by VAR for offside.

But Haaland was given another chance deep into stoppage time when Antonee Robinson brought down De Bruyne in the box.

Haaland stepped up and converted his spot kick, despite Fulham goalkeeper Bernd Leno getting a touch.

Haaland was left out of the starting line up for the third game in succession due to a foot injury, but was fit enough to make the bench.

In his absence Julian Alvarez was given another chance to impress after scoring one goal and setting up two more in the midweek Champions League win against Sevilla.

And he was on target again to put City ahead after 17 minutes when chasing Ilkay Gundogan’s pass and lashing a shot into the roof of Leno’s net.

The script was set for another straight-forward win for the home team until it was reduced to 10 men in the first half.

Joao Cancelo’s clumsy challenge on Harry Wilson sent the Fulham midfielder tumbling in the box and prompted referee Darren England to point to the spot.

He also issued a red card to the City defender for a professional foul before Andreas Pereira’s penalty sent Ederson the wrong way in the 28th minute.

Even with a man down, City dominated the second half without creating many openings.

Guardiola then sent for Haaland and he duly delivered, scoring his 23rd goal of the season in just 16 appearances.