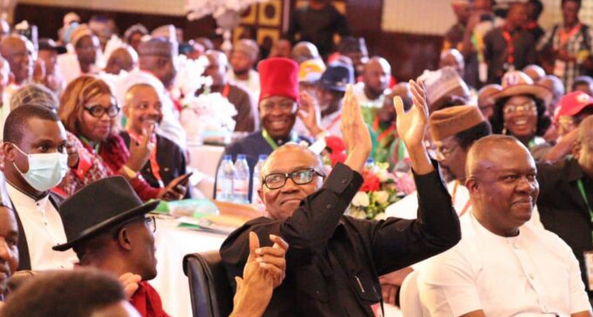 ENUGU, Nigeria (VOICE OF NAIJA)- A former Anambra chief of staff, Chuks Iloegbunam has said presidential candidate of Labour Party (LP), Peter Obi’s record as Anambra State Governor shows that he is the most competent to rule the country.

Speaking in an interview with TheCable, Iloegbunam noted Obi tackled crime and insecurity, and also developed the economy of the state without “borrowing a single naira”.

He said, “I would without equivocation state and reiterate that Mr Peter Obi is the best presidential candidate on offer today.

“Peter Obi combated crime and violence head-on with the result that, at the end of his eight-year, two-term tenure in 2014, Abubakar Mohammed, the then inspector-general of police, pronounced Anambra state under Mr. Obi’s watch the safest in the country in the previous five years.

“Peter Obi didn’t borrow a single naira in the name of Anambra state. Rather, he left billions in the state coffers for his successor in office to build his own legacy on.

“Peter Obi is unlike another of these presidential candidates who condemned the lynching of Deborah Yakubu on his Twitter and Instagram handles at 12 noon and yanked it off 60 seconds later, a so-called “unifier” who has not condemned the collapse of security under Buhari’s comatose administration.”

Iloegbunam said the rallies organised in support of the LP presidential candidate across the country are a testament to the people’s trust in him to restore peace and unity in the nation.

He continued, “No other Nigerian politician has occasioned the sort of “youthquake” now happening in this country.

“No other politician has effectively brought Nigerians together under the objective of peace, plenty, progress and purpose, without any bother about state of origin, ethnic origin, educational background or religious affiliation Peter Obi is of today.

“The politics of yesterday is behind us. The people of this country rooting for his presidency, not just the young, are determined to have a fresh start, a new beginning, a fresh era of meaningful existence for everyone.”

Iloegbunam, who recently published a book on the life and achievements of Obi as a Governor, stressed that Nigerians need to be more aware to make “informed choices in choosing their political leaders” in the 2023 polls.