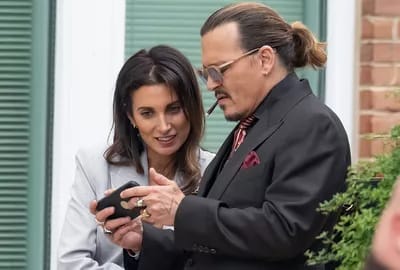 American actor, Johnny Depp is dating Joelle Rich, an attorney who represented him in his UK libel trial against the Sun.

He lost the libel trial in November 2020.

He sued the newspaper for calling him a “wife-beater,” but the court upheld the outlet’s claims as being “substantially true” and his ex-wife Amber Heard testified to back up the claims.

In March 2021, his attempt to overturn the decision was overruled.

The London-based lawyer is married but separated, and her divorce may not have been finalized yet.

Depp’s new romantic interest was not among the lawyers who represented him in this year’s defamation case against his ex-wife Amber Heard, 36, in Fairfax County, Virginia.

A jury found that Heard defamed him in her 2018 Washington Post op-ed about domestic violence, though she didn’t mention him by name.

The Pirates of the Carribbean star, was awarded more than $10 million in damages, while Head won one of her three defamation countersuit claims and was awarded $2 million. (They are both appealing the verdicts.)

Though Rich was not on Depp’s legal team this time, she did make several court appearances to show support.

She was photographed with Depp outside of the courthouse on May 3, and she was pictured hugging Depp’s attorney Camille Vasquez inside the courtroom on May 16.

According to Us Weekly, the British attorney — who is a mother of two — was in Virginia to show her “support” for the Oscar nominee.

“There was no professional obligation for her being there,” a source also told the magazine, adding that Depp and Rich would “discreetly” meet up in hotels during the early stages of their romance.

Earlier this summer, Depp, 59, sparked romance rumors with another attorney, Camille Vasquez, who represented him in his victorious US defamation trial against his ex-wife Amber Heard.

However, Vasquez quickly quieted the rumor mill, calling the allegations “sexist” and “unethical.”

“I care very deeply about my clients, and we have obviously become close,” she told People in June. “But when I say ‘we,’ I mean the entire team, and of course that includes Johnny.”

Vasquez noted that the Pirates of the Caribbean star had been her friend and client for four and a half years.

“It’s also an unethical charge being made. It’s sexist,” she added.

“It’s unfortunate, and it’s disappointing, but at the same time, it kind of comes with the territory. I can’t say I was all that surprised.”