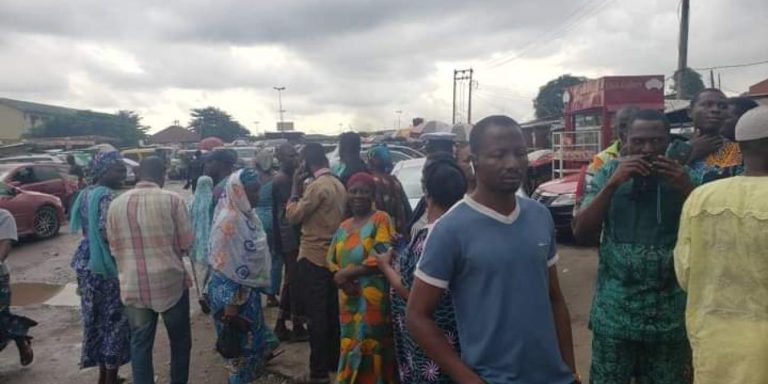 IBADAN, Nigeria (VOICE OF NAIJA)- Residents of Agege community in Agege Local Government Area of Lagos have protested against the continued detention of community leaders by the Nigeria Police Force.

Some of the community leaders were arrested on Wednesday for demanding that Ikeja Electric should meter their energy consumption.

On Wednesday, the police terrorised the community and arrested a Muslim cleric, among others for protesting against mass electricity disconnection and outrageous bills.

The community leaders were still in the police custody on Thursday, according to the residents.

They insisted that unless the Ikeja Electric company provided them with prepared meters, they would not pay the bills.

The operatives were alleged to have swooped on the protesting community, for resisting officials of Ikeja Electric led by one Emmanuel from carrying out mass disconnection on Tuesday, September 20, 2022, which stemmed from alleged excessive billing.

It reported that trouble started when the electricity distribution company brought “crazy and unwarranted” estimated billing, amid its refusal to issue prepaid meters to most electricity consumers in Agege.

Sequel to the refusal to meter the houses; the people in turn refused to pay the estimated bills.

“Now Ikeja Electric embarked on mass disconnection which the people resisted, demanding that their houses should instead be metered.

Following brawls, police operatives came and started hounding people, and arrested two leaders of the area, Alfa Saheed Fatai, and Odewale Jamiu inside the mosque,” one of the residents had told SaharaReporters.

A human rights organisation, the Campaign for Democratic and Workers Rights (CDWR) has since condemned the police attack on the community, describing the arrest of Alfa Saheed, the Imam of Ladoje Mosque, Agege and Odewale Jamiu early Wednesday as unacceptable.

The group in a statement issued on Wednesday, disclosed that the police officers from the Abattoir Divisional Headquarters, Oko Oba Agege carried out the arrest and invasion of the community at the behest of Ikeja Electric.

One of the residents, who gave his name as Femi Adewara, told SaharaReporters they were protesting at Abattoir Police Station for the second day in the rain.

He added that the police have refused to release their leaders, insisting that they would be arraigned in court.

He said, “Our struggle with Ikeja Electric continues, our people are still in the cell in Abattoir Police Station. Their lawyer (Ikeja Electric) insists we must be charged to court and here we are still waiting for the outcome.