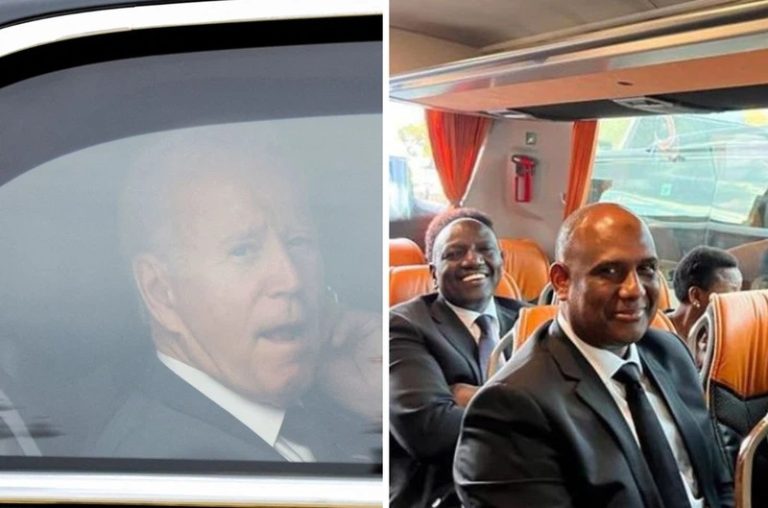 IBADAN, Nigeria (VOICE OF NAIJA) – Several photos of African leaders being transported to the venue of Queen Elizabeth’s state burial at Westminster Abbey in London on Monday, sparked outrage on social media.

While most foreign dignitaries were transported by a fleet of buses, US president Joe Biden and his wife, Jill, were allowed to travel to Queen Elizabeth’s funeral service on Monday, 19 September, in an armored presidential limousine: “The Beast”.

As the funeral led trends across social media platforms, with the hashtag #queensfuneral, it appeared many social media users were not happy about this arrangement which was announced days ahead of the funeral.

According to @Omoalayo_: “This is not about the UK, the US won’t let their president ride on the bus… Interpol won’t, FBI won’t.. They just won’t allow it” while @Tiyiselani_TP tweeted: “Whether we like it or not, a USA president is no ordinary president, he’s a president of the most powerful nation in the world. His security will be much higher.”

@JosephBowyer1 was livid about Africans always going about with comparisons. He wrote: “Why do Africans like comparison? Yes and Biden is greater than every African president.”

In the case of @Rhumeey, the African leaders appeared to be insensitive to the issues surrounding the fact that they were transported in buses.

He wrote: “The priceless smiles on their faces…so happy to be invited, ridiculed.. and humiliated regardless!”

What we do know is that, according to the UK’s Express news portal, the White House demanded that Biden travels via a six-car motorcade for “security reasons”. Their request was granted by UK officials, hence the development.

The publication further claimed that the rest of the guests were transported in buses to “ease traffic congestion”.

However, according to reports, Biden was not the only one excluded from the VIP bus ride. Others included the royal families from European countries.

Also, on the list were leaders of G7 countries, like France’s Emmanuel Macron, Japanese Emperor Naruhito, and Canada’s Justin Trudeau, among others. This, they explained, was also for “security reasons”.

It is, therefore, not entirely surprising or shocking that this is being played out as Queen Elizbeth II begins her final journey, having died at the age of 96, after 70 years on the throne. She was the longest reigning monarchy in British History since the Stuarts took the throne in 1066.

Leaders of the world paid tributes to her distinction as one of the most influential figures of the 20th and 21st centuries who personified dignity, selflessness, graciousness and decency in public life, with great authority on the world stage.

The government of Canada declared ten days of mourning, Brazil has also declared three days of mourning, in countries across the world, including the United States, Australia and Nigeria, flags are being flown at half-mast in honour of a monarch who was a commanding presence in British public life for seven decades, and indeed the only monarch that many Britons have ever known, justifying PM Liz Truss’s statement that Elizabeth II was “the rock upon which modern Britain was built”

She led the monarchy and her people through the best of times and the worst of times – 15 Prime Ministers from Winston Churchill’s second coming (1951 -1956) to Liz Truss whose formal appointment as Prime Minister was one of her last duties, more than 10 Summer Olympics, seven Popes of the Catholic Church and 14 American Presidents – whom she met personally with the exception of Lyndon Johnson.

She was an exemplar of duty, and a force for moderation and reconciliation, through milestones and traumas at both personal and public levels.

But just as there are many who share these views and have continued to pay tributes to her, there are others who object.

Those who objected have their reasons for doing so and the reasons are not far-fetched, especially in Africa. The momentum that eventually led to independence started to take shape after the Second World War.

At that time, only a handful of countries in Africa were independent: Ethiopia had never been colonized, despite multiple attempts by the Italians; Liberia, founded by formerly enslaved persons, declared itself independent in 1847; and Egypt achieved independence in 1922. South Africa officially gained its independence from Britain in 1910, but European settlers retained white minority rule.

After the war, African people wanted change, and inspired by Indian self-rule, the mood was hopeful for establishing a new society free of European control.

In precolonial history, Nigeria was home to a number of powerful African kingdoms and states.

After the British claim on the area received international recognition at the Berlin Conference of 1878, it took them many years to gain control over the whole region.

The British took advantage of the ancient state structures and adopted a system of indirect rule, leaving traditional leaders in power who owed allegiance to the colonial authority.

The area was initially divided into Northern Nigeria, Southern Nigeria, and Lagos Colony, with each region having its own system of governance.

On 1 October 1960, Nigeria gained its independence as a federation, becoming a member of the British Commonwealth of Nations, with Elizabeth II as its nominal head of state.

Even before the announcement of Her Majesty’s demise, a Nigerian Professor, Uju Anya of the Department of Modern Languages at the Carnegie Mellon University (CMU), United States had written on Twitter that she wished the Queen would die an “excruciating death…in agony.”

She wrote: “I heard the chief monarch of a thieving raping genocidal empire is finally dying. May her pain be excruciating.”

Professor Anya accused the Queen of having had a hand in the genocide against her people, the Igbos of Nigeria, during the Nigerian civil war, 1967 -70.

Jeff Bezos, founder of Amazon and others have since taken her to task. Twitter has taken down her tweet. Carnegie Mellon University has since distanced itself from her statement. But she remains adamant.

She blames the Queen for the Nigerian Civil War. In Australia, Prof. Sandy O’Sullivan, a Wiradujuri, sounding very much like her CMU colleague, says Elizabeth II was not a bystander to the effects of colonization and colonialism, rather she was an architect of it.

“She had a job for decades” says O’Sullivan, “that oversaw action that made indigenous people’s lives worse.”  Other politicians have also had their say.

In South Africa, the Economic Freedom Fighters (EFF) issued a statement in which the political party describes the Queen as “the head of an institution built up, sustained, and living off a brutal legacy of dehumanization of millions of people across the world…We do not mourn the death of Elizabeth, because to us her death is a reminder of a very tragic period in this country and Africa’s history.”

Specifically, the EEF blamed Queen Elizabeth II for the British Royal family’s war against the Xhosa, and for the exploits of Cecil Rhodes in South Africa, Zimbabwe and Zambia.

In Nigeria, Omoyele Sowore, Presidential candidate of the African Action Congress (AAC) also flayed the Nigerian Government for directing that flag should be flown at half-mast for Queen Elizabeth.

In an official tribute, Nigeria’s President Muhammadu Buhari had declared that the history of Nigeria would be incomplete without a chapter on Queen Elizabeth.

Therefore, Africans were totally bewildered when they saw their leaders being chauffeured in buses to the venue of the funeral.

Most of them, in fact, were all smiles and were seen looking extremely excited as they sat on board the vehicle which seemed to have been prepared ‘only’ for Africans as the Royal family wanted to ‘ease their movement’.

Social media trends revealed, also, that the leaders seemed to still be continuing with the era and trend of being under their colonial masters, as they all appeared to remain in awe of the Brits, even after losing such a powerful monarch.

A school of thought argued that Biden’s status as the world’s most powerful president was not enough to disallow other African Presidents from going into the venue of the event with their personal escorts and vehicles.

It is believed that the colonial masters still perceive the Africans as slaves who do not deserve more than to be packed in buses to attend such an important event in the British history.