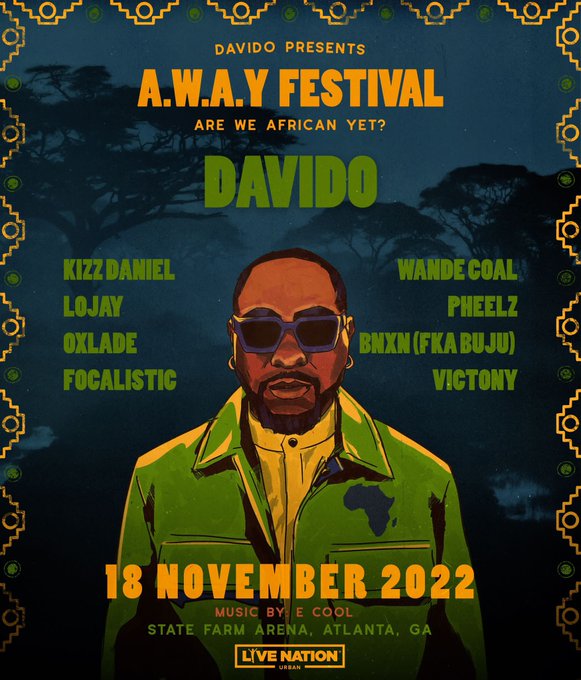 IBADAN, Nigeria (VOICE OF NAIJA)- Nigerian music star, David Adeleke a.k.a Davido, has announced his first annual “Are We African Yet?” (A.W.A.Y) Festival at Atlanta’s State Farm Arena on 18 November, 2022.

Colleagues including Kizz Daniel, Pheelz, Lojay and BNXN formerly known as Buju, Oxlade, Victory, are among the performers who will join the Afrobeats star/festival founder onstage.

A release announcing the A.W.A.Y Festival says its mission “is to unite communities, promote collaboration and celebrate the diversity and magic of African music and culture.”

The event is also described as an “opportunity to build a coalition between Africa and the world.

“Through the power of music, A.W.A.Y seeks to celebrate our shared parallels in culture, dance, clothing and provide an opportunity to empower everyone to build pride and claim their heritage proudly.”

Davido in an accompanying statement, “Growing up, we were often made to feel unworthy as Africans.

“So many of us didn’t want to claim where we were from and, in some cases, denied our heritage. That’s not the case anymore.

“111We are proud Africans, and we want to invite people to enjoy our culture – our music, food and art. That’s what the A.W.A.Y Festival is all about.”

Tickets for the inaugural A.W.A.Y Festival go on sale beginning Friday at Ticketmaster.com

Born in the U.S. and raised in Nigeria, Davido (born David Adedeji Adeleke) was presented with the Humanitarian Award of the Year at the recent Headies Awards in Atlanta.

Earlier this year, he released “Stand Strong” featuring the Sunday Service Choir — the first single from his upcoming fourth studio album — and collaborated with FIFA on “Hayya Hayya (Better Together),” featured on the organization’s 2022 World Cup soundtrack.

Davido also recently wrapped his sold-out “We Rise by Lifting Others” world tour.

The artist’s most recent album release is 2020’s “A Better Time”.

A follow-up to his 2019 sophomore set A Good Time, Davido’s third studio album sported guest appearances by Nicki Minaj, Chris Brown, Young Thug and Lil Baby, among others. It peaked at No. 4 on Billboard’s World Album chart.