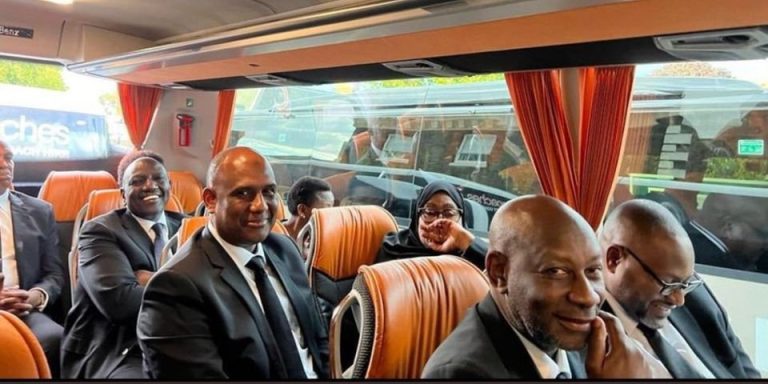 The photos that surfaced showed them being transported on a coach provided by the United Kingdom government for the leaders attending the burial ceremony of Queen Elizabeth II at Westminster Abbey.

The UK government had issued travel guidelines to the heads of states attending the Monday event, where they were asked to park their vehicles at a site in west London.

Due to the VIP travel arrangements, President William Ruto and the First Lady Rachel Ruto arrived for the event, and boarded the coach together with other African leaders.

The move has, however, been heavily criticized by the G7 countries, including the US, Canada, France, Germany, Italy, and Japan.

The G7 diplomats insisted that their leaders must be accorded the VIP reception, including traveling using their vehicles as part of security enforcement to them.

President Joe Biden arrived at the event with his full security details using his armored limousine, which is referred to as ‘the beast.’

Also, the move has been criticized in Africa as it appeared that only leaders from the African continent have followed the guidelines.

Africa is leading in its membership to the Commonwealth with 21 memberships.

The Commonwealth of nations refers to a political association of 56 member states, the vast majority of which are former territories of the British Empire.

The Commonwealth dates back to the first half of the 20th century with the decolonisation of the British Empire through increased self-governance of its territories.