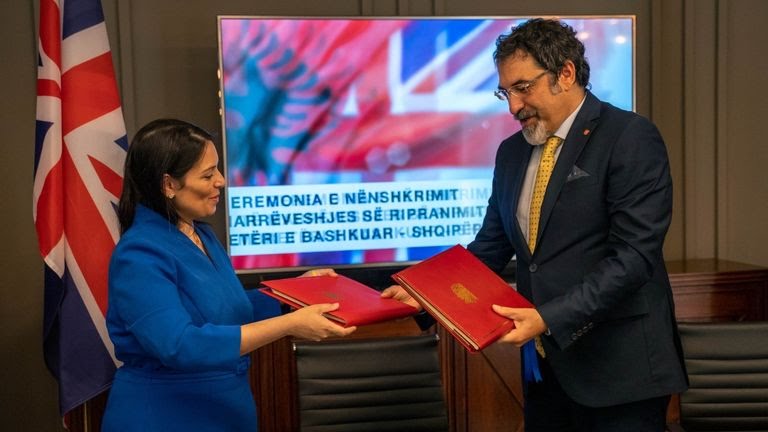 The United Kingdom government has continued on its course of clamping down on immigration, announcing that it will be working more closely with Albanian authorities to this end.

Criminals and unsuccessful asylum seekers from Albania will face a quicker return to their home country under a new deal secured by Priti Patel.

The number of people arriving on Britain’s shores by boat from France hit a new record for a single day on August 22, when at least 1,300 individuals arrived in the UK using such irregular means.

The previous weeks had already seen record-pushing days, with more than 600 individuals arriving on a single day during the summer months.

The weekly Mail on Sunday newspaper reported earlier in August, that almost 40% of those arriving in Britain this way in June and July came to the UK from Albania, which is considered a safe country of origin.

In July, UK Home Secretary Priti Patel had signed a new agreement to remove Albanian nationals who have no right to be in the UK, as part of a two-day visit to the Albanian capital Tirana.

Home Secretary Priti Patel now announced that the repatriation of Albanians would be expedited from next week: “Thanks to our excellent levels of co-operation with Albania, we will take every opportunity to speed up removals of Albanians with no right to be in the UK.”

“Large numbers of Albanians are being sold lies by ruthless people smugglers and vicious organised crime gangs, leading them to take treacherous journeys in flimsy boats to the UK,” she added.

Patel had championed the UK’s new immigration and asylum law, which was made law earlier this year. The Nationality and Borders Bill is designed to introduce tougher sanctions on people smugglers, including longer prison sentences and higher fines, while also affecting irregular migrants, who — regardless of their reason of coming to the UK — will henceforth only receive temporary protection status, as opposed to automatic right to settle in Britain.

The new agreement, signed with Albanian Interior Minister Bledar Çuçi, will strengthen existing arrangements the UK has to remove Albanian nationals who have no right to be in the UK.

This includes failed asylum seekers, foreign national offenders (FNOs), and individuals who have overstayed their visas.

The Home Office says that Albanian nationals make up the largest number of foreign national offenders in UK prisons, totalling 16 per cent of the FNO population.

Outgoing Prime Minister Boris Johnson had pledged to “take back control” of Britain’s borders as his main argument for the UK’s departure from the European Union (“Brexit”). In addition to supporting the Home Secretary’s push for a more restrictive immigration system, he also spoke out in favor of another divisive plan to make migration to the UK less attractive: In April, Britain revealed plans to deport asylum seekers to Rwanda for processing and resettling.

The government argued that anyone facing a real threat of persecution would welcome any safe haven that would accept and integrate them. The Rwanda deportation policy, however, is currently placed on hold and is subject to a legal challenge raised by the European Court of Human Rights (ECHR), which is due to be heard in September.

With such skyrocketing numbers, the UK wants to speed up its deportation policies, as places to house irregular arrivals are becoming scarce and the burden on taxpayers is growing.

Revealed: Queen Elizabeth Had Bone Marrow Cancer Before Her Demise