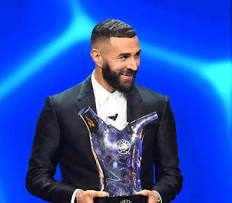 Real Madrid striker and captain, Karim Benzema, has been named the UEFA men’s Player of the Year.

The award ceremony took place after the UEFA Champions League draw was held at the Haliç Congress Center in Istanbul, Turkey.

The winner was selected by a jury composed of coaches of clubs that participated at the group stages of the UCL, Europa League and Europa Conference League, and a group of journalists.

“I’m really happy,” he said as he collected his award. “It’s the first time I’ve won this trophy but for me the most important thing is to win trophies with the team. Mr Ancelotti is the best coach in the world; he gets it right with every player, he gives us confidence and he tells you what to do before every match.”

Benzema’s club manager, Carlo Ancelotti, won the Men’s Coach of the year award, as both stars learned that Real Madrid will defend their title in Group F, against RB Leipzig, Shakhtar Donetsk and Celtic.

Alexia Putellas won the Women’s Player of the Year, meaning that both player gongs went to the El Clasico clubs.