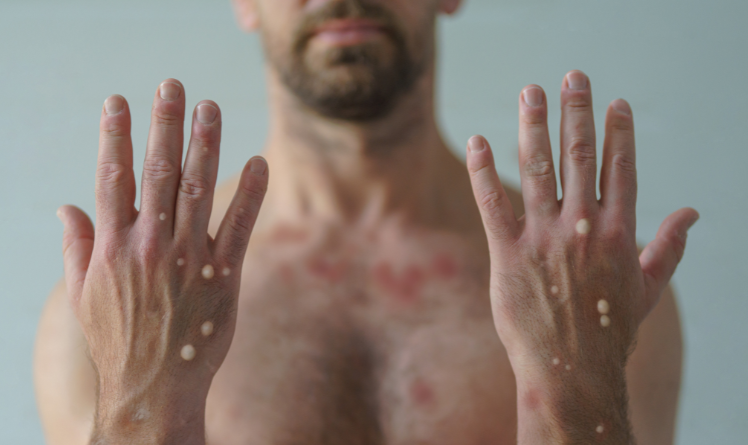 An unidentified man from Italy has become the first person to simultaneously test positive for monkeypox, Covid-19 and HIV.

The unidentified man first developed a fever, sore throat and headaches nine days after returning from a trip to Spain where he had unprotected sex with other men, according to a case study in the Journal of Infection.

He first tested positive for COVID-19 on 2 July — then within hours started getting a rash and “small, painful” blisters around his body, legs, face and butt, the study said.

He went to an ER, and on the second day there again tested positive for COVID-19 — as well as monkeypox.

On 5 July, the vesicles had further spread and evolved into pustules – small bumps on the skin — at which point the man went to the emergency department at the San Marco University Hospital in Catania, Italy and was subsequently transferred to the Infectious Diseases unit.

There, he was tested for monkeypox and subsequently returned a positive result.

The patient was also screened for multiple STIs. He tested positive for HIV-1, and the researchers said that “Given his preserved CD4 count, we could assume that the infection was relatively recent.”

After recovering from Covid-19 and monkeypox, the patient was discharged from the hospital on 11 July, and sent home to isolate.

By this stage, his skin lesions had healed, after crusting over, leaving a small scar.

“As this is the only reported case of monkeypox virus, SARS-CoV-2 and HIV co-infection, there is still not enough evidence supporting that this combination may aggravate [a] patient’s condition,” they wrote.

The researchers said that the “case emphasizes that sexual intercourse could be the predominant way of transmission” of monkeypox.

“Therefore, complete [sexually transmitted infection] screening is recommended after a diagnosis of monkeypox.

“In fact, our patient tested positive for HIV-1 and, given his preserved CD4 count, we could assume that the infection was relatively recent,” they noted of the patient, who previously also had syphilis.

While it is the first known case of its kind, more will likely follow given the rapid spread of monkeypox, with more than 45,000 cases reported in 98 countries.

“The majority of cases were registered in gay or bisexual men often suffering from other” STIs, they noted.

“As these pathogens continue to spread, individuals can be simultaneously infected with monkeypox virus, SARS-CoV-2 and STI, making it difficult for physicians to perform the correct diagnosis,” they said, noting how many share similar symptoms.

“Healthcare systems must be aware of this eventuality, promoting appropriate diagnostic tests in high-risk subjects, which are essential to containment as there is no widely available treatment,” they wrote.