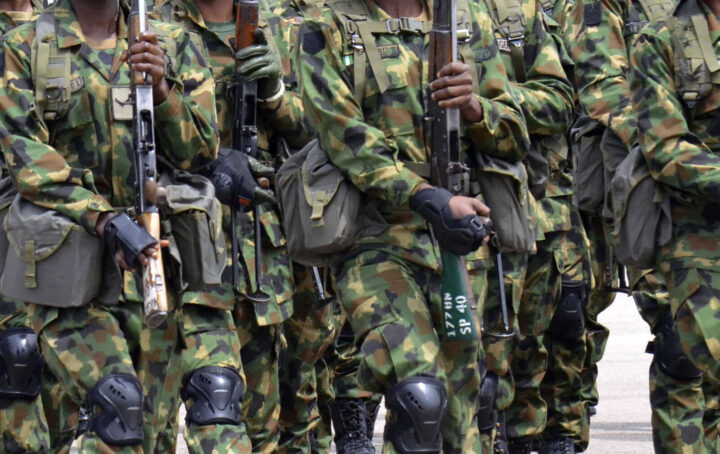 Musa Danmadami, the director of defence media operations, during a bi-weekly press briefing on Thursday, said the hideout was raided on August 13.

According to Danmadami, eight suspected terrorists were arrested, and also eight guns and other items were recovered.

“During the raid operation, 8 suspected terrorists were arrested, 5 AK47 rifles and 3 pump action guns were recovered, while large quantities of items suspected to be cannabis sativa, 3 machetes, knives among other items were also recovered.”

The defence operations spokesperson said troops of Operation Whirl Punch operating in the North-Central have sustained the momentum to deny terrorists freedom of action in their joint operation area.

“The air strike was on the terrorists who had assembled for a meeting hosted by a notorious terrorist leader Aminu Duniya. Reports revealed that the air strikes resulted in the neutralization of several of the terrorists.

“Similarly, between 14 – 17 August 2022, troops of Operation SAFE HAVEN in conjunction with vigilantes and Nigeria Security and Civil Defence Corp conducted operational activities at Mum village, Garga District, in Kanam Local Government Area of Plateau State, as well as Mariri Town, Kauru Local Government Area and Zango Kataf Local Government Area of Kaduna State. During the operations, 21 suspected terrorist, 7 suspected kidnappers and 3 suspected vandals were arrested at different locations, while 7 terrorists were neutralized with 12 civilians rescued from the kidnappers den. Items recovered from the suspects include 3 motorcycles, 8 mobile phones, some quantity of illicit drugs and the sum of N60,000.00

“Furthermore, between 14 – 18 August 2022 troops of Operation WHIRL STROKE in conjunction with the Department of State Service conducted raid operation at bandits camps at Ankya Village, ZakiBiam town in Ukum Local Government Area, Mahaga Community in Logo Local Government Area of Benue State, as well as Jamata in KotonKarfe Local Government Area of Kogi State. During the operation a notorious bandit identified as Timothy Nwagaga (aka Ambiju) was arrested at Zaki Biam town in Benue State. It was revealed that the suspect is a gang member of a notorious bandit know as Anhie (aka short man) who has been on troops wanted list.”

Naziru Mohammed, a wanted gun runner, was also said to have been arrested at Murtala Mohammed Bridge, in Koton Karfe LGA of Kogi state.

Danmadami said items recovered during the operation include 1,000 rounds of 7.62mm ammunition, large sum of money, two mobile phones, one tricycle and one motorcycle.

He added that all recovered items have been handed over to the relevant authorities for further action.

Despite Recent Gaffe In Edo, Youths Turn Up In Numbers To Meet Tinubu In Abuja