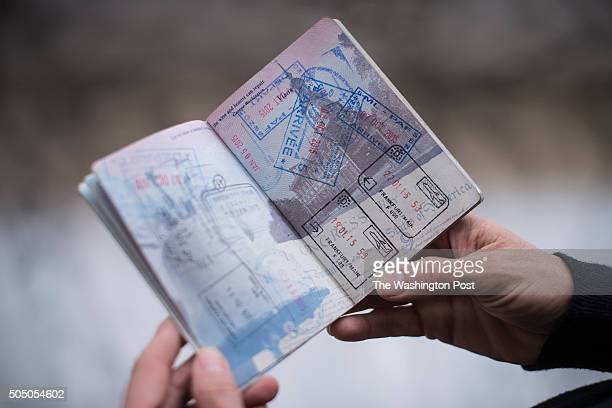 WASHINGTON, DC - JANUARY 8: Jennifer Cookoe, head of Africa for the Center for Advanced International Studies, shows off her passport while standing for a photo as she prepares to leave for a trip to Nigeria at her office in Washington, DC on Friday, January 08, 2016. Like many of Washingtons frequent international travelers in the wake of terrorists attacks in Mali, Paris and elsewhere, Cooke taking new precautions about where she stays and goes on her trips. (Photo by Jabin Botsford/The Washington Post via Getty Images)
Share
Facebook Twitter LinkedIn Pinterest WhatsApp Email

RICHMOND, Texas (VOICE OF NAIJA) – Voiceofnaija.ng has uncovered the real reason Nigerians have been unable to renew or obtain new international passports.

The Nigerian government and a company, Iris Smart Technology Limited, had signed an agreement for the latter to be in charge of production of the document, a deal which was reportedly sealed in 2003.

But the company has continued to slow down the process of production, a development which has forced Nigerians to call on the federal government to terminate the passport production contract.

Those who spoke with voiceofnaija.ng are calling it a scam that has led to Nigerians losing a lot of money, travel opportunities and deadlines.

In a survey conducted by this medium, 9 out of 10 Nigerians want the FG to terminate the contract the government has with IRIS Tech.

“Honestly, it is damaging the image of the country abroad. I have a sister who was offered a nursing job abroad, but she missed the opportunity and had to go back to the line to wait for another year just because she couldn’t get her passport on time,” claimed one Emeka Eze who participated in the survey.

According to the survey, many were of the opinion that the problem with the delay in passport production in Nigeria lies solely with Iris Smart Technology Limited, following the 2003 contract described as the biggest scam in Nigeria’s history.

“Even President Buhari have asked that the contract be reviewed and terminated a while back, but nothing has been done about it till date because the ministry says contract has to stay.”

According to the survey, the contract between the ministry and IRIS Smart Technology was overwhelmingly found to not be in the best interest of Nigeria and Nigerians.

An investigation by voiceofnaija.ng shows that there was an MoU signed by the former minister of the Interior, Lt. Gen. Danbazau (rtd), and IRIS Smart Technology. Under the contract agreement, IRIS Smart Technology was to set up an e-passport production factory in Nigeria, but that is yet to happen years after the deal.

In a press release titled: “FG Domesticates Passport Production in Nigeria”, The federal government said it has domesticated the production of passports in Nigeria.

“The agreement for the domestication of the production of passports which was signed between IRIS SMART TECHNOLOGY LTD, an indigenous company, and Nigerian Security Printing and Minting Plc at the Ministry of Interior in Abuja, entails that production of e-passport will be done in Nigeria alone and will no longer be done by foreigners.”

A frustrated source familiar with the situation said: “We have everything it takes to make our own passports here in Nigeria. The Nigerian Security Printing and Minting Plc, have been ready forever, but IRIS Tech continues to hold Nigerians hostage by not keeping to their end of the MoU.”

Meanwhile, the Ministry of Interior has continued to maintain that the PPP agreement it has with IRIS stands and this inevitably means that some Nigerians who have worked hard and have gained admission into schools abroad or a job will continue to face the scarcity of the international passport allegedly caused by the tech company.

“Mr. Felix Fatosun, Mr. Fisher, Mr. Deji, and Mr. Farouk in conjunction with an expatriate in London are the ones making life hard for Nigerians,” our source lamented.

PHOTOS: Many Trapped As Building Collapses In Abuja