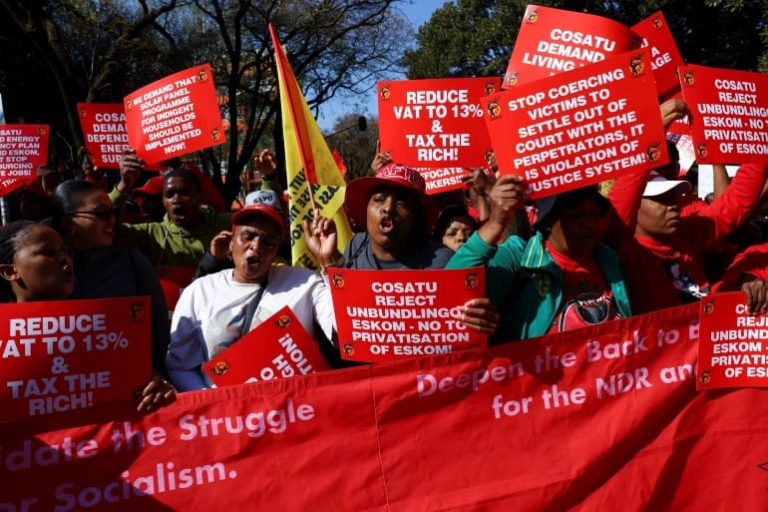 Thousands of South African workers on Wednesday, protested against the country’s rising cost of living including record-high fuel prices and increased costs for basic foods.

“We cannot breathe,” the General Secretary of the South African Federation of Trade Unions, Zwelinzima Vavi, told the crowd.

“We cannot compromise when we know that yesterday and today, at least 14 million people are forced to skip a meal a day because they simply cannot afford to buy a plate of food.”

Moalusi Tumane, a schoolteacher in Palm Ridge, east of Johannesburg, said teachers are hard hit by the rising cost of living.

“The economy has gone down, especially for us poor teachers … I am struggling to pay my debts because of the interest rate … Petrol (gas) is going up, food prices are going up, even our medical aid premiums are increasing,” said Tumane.

“That is a problem because as a teacher I can no longer afford to live the life that I deserve to be living.”

He urged the government to urgently increase teachers’ salaries and the unions have demanded a 10% salary increase.

Protests in other parts of the country were much smaller however, with union calls for a “national shutdown” largely unheeded.

South Africa’s economy is still reeling from the negative impact of the COVID-19 pandemic in which an estimated 2 million jobs were lost, exacerbating the country’s 35% unemployment rate.

Russia’s invasion of Ukraine has also hit South Africa’s economy, with the gas price reaching record highs despite the government’s suspension of an increase in the fuel levy earlier this year.

According to a World Bank report, about 30.3 million South African citizens are living in poverty, while 13.8 million people are facing food scarcity that has been worsened by rising food prices due to the Russian invasion of Ukraine.

People are having a difficult time surviving, Aljazeera reporter Fahmida Miller said, as the economic conditions have not improved since the pandemic.

“South Africa has been plagued by rolling blackouts,” she said.

“So not only do they want the cost of electricity specifically to be addressed, but they also want a stable electricity supply.”

With South Africa’s inflation now at 7.4%, the rising cost of living has been compounded by rolling power blackouts due to inability of the state-owned power company, Eskom, to generate adequate electricity.

Eskom has applied for an increase in electricity prices despite it failing to provide an uninterrupted power supply for industry and households.

Lydia Motswahole, who works for dairy company Clover, said she currently has no income because the company’s workers have been on strike since November.

The striking workers are demanding that the company halt its plans to cut their salaries by up to 20% and to stop plans to lay off workers.

“I am a single parent, so I am seriously affected especially because we have been on strike for 9 months so there is absolutely no income,” said Motswahole.

“We are appealing to the government to intervene in the ever-increasing price of food and petrol. We cannot even afford to pay for transport.”