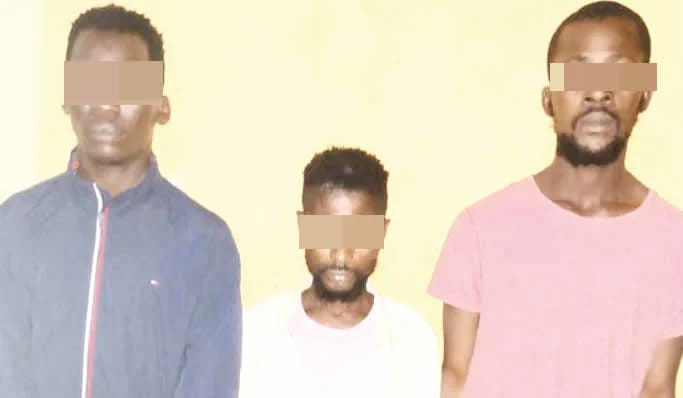 IBADAN, Nigeria (VOICE OF NAIJA)- Men of the Lagos State Police Command have arrested three suspected members of the Klansman Confraternity for allegedly shooting a member of the Eiye Confraternity, Akinola Ayegbusi, to death at a restaurant in the Alapere area of the state.

It was gathered that normal activities were ongoing when the suspects, who were said to be on a revenge mission, trailed Ayegbusi to the front of the restaurant.

After spotting him, the suspects, who were armed with guns and cutlasses, allegedly shot Ayegbusi. In a bid to escape, the victim ran into the restaurant.

Thereafter, the suspects, numbering six, were seen in a video clip captured by the Closed-Circuit Television installed on the premises of the restaurant, shooting and using cutlasses to hack Ayegbusi till he died.

The attack threw the security guard, workers and customers, who came to patronise the restaurant into panic as they were seen in the video clip, running helter-skelter to escape from the crime scene.

The suspects left the premises of the restaurant after perpetrating the crime.

A source, who spoke to Punch correspondent on Tuesday, said residents in the area alerted the police after the suspects fled from the crime scene.

“The policemen from the Alapere Division quickly mobilised to the restaurant. They evacuated the corpse and commenced investigation,” the source said.

He said efforts were on to arrest other fleeing members connected to the crime, adding that the suspects would be arraigned at the conclusion of the investigation.

SP Hundeyin said, “Operatives of the Lagos State Police Command have arrested a suspected cultist, Jamiu Rasheed, 22, who was captured on CCTV on July 7, 2022, hacking and shooting to death, one Akinola Ayegbusi, a rival cult member at a restaurant in the Alapere area of Lagos State.

“Investigations revealed that Jamiu has been a member of Klansman Confraternity since 2017 and has participated in the killing of two other rival cultists. Investigation into the crime also led to the arrest of the armourer of the group, one Sheriff Module, 26, who was found with two locally-made pistols; and one other cultist, Emmanuel Samson.

“Sheriff who was also part of the killing confessed that it was carried out to avenge the death of their leader who was killed by the Eiye Confraternity on November 23, 2021. Efforts are ongoing to arrest other fleeing cultists. Suspects will be arraigned at the conclusion of investigations.”

Hundeyin said the state Commissioner of Police, Abiodun Alabi, called on parents and guardians, as well as traditional, religious, and political leaders to prevail on their children and wards, and the teeming youth population to stay away from cultism and other social vices.