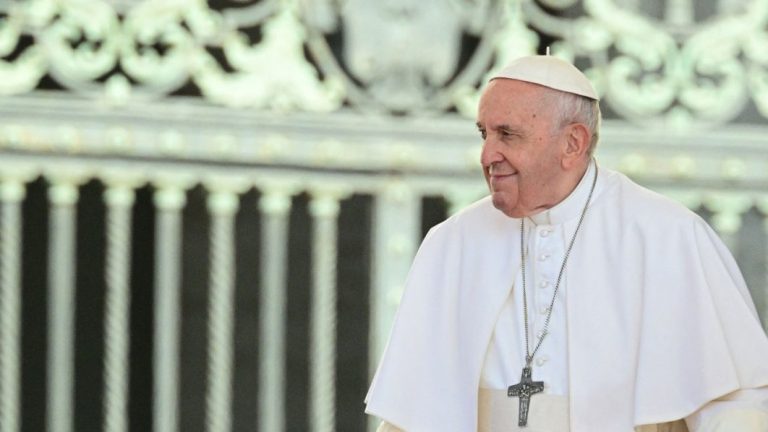 Pope Francis renewed calls for peace Wednesday “for the beloved Ukrainian people” on the war-torn country’s Independence Day and the six-month anniversary of the start of Russia’s invasion.

Following his weekly general audience at the Vatican, Francis directed his address to “the beloved Ukrainian people who for six months today have been suffering the horror of war,” while warning of the risk of nuclear catastrophe in the region.

“I hope that concrete steps will be taken to put an end to the war and to avert the risk of a nuclear disaster in Zaporizhzhia,” he said, referring to the Russian-controlled nuclear plant in southern Ukraine — Europe’s largest – that has been the target of military strikes, blamed by each side on the other.

The 85-year-old pope cited “so many innocents who are paying for madness” — whether prisoners, refugees, children or orphans — as the war drags on.

“I think of that poor girl who died because of a bomb under the seat of her car in Moscow,” added Francis, referring to Daria Dugina, the daughter of a Russian ultranationalist intellectual allied with President Vladimir Putin, killed by a car bomb Saturday.

“Those who profit from war and the arms trade are criminals who kill humanity,” the pope said, while denouncing long-standing military conflicts in Syria, Yemen, and Myanmar.

Ukraine’s ambassador to the Holy See, Andriy Yurash, wrote on Twitter he was disappointed in Francis’ speech, saying the pontiff should not have put “aggressor and victim” in the same category.