Governor Inuwa Decorated As FNIOB Over Contributions To Building Industry 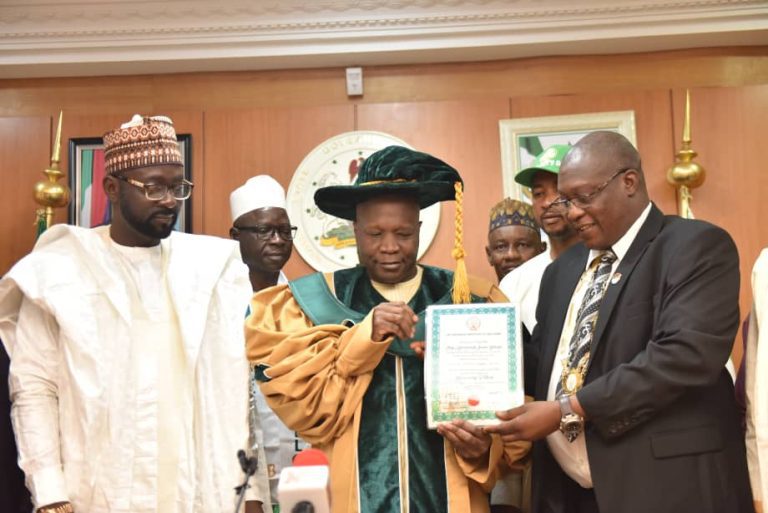 Gombe State Governor Muhammadu Inuwa Yahaya has been decorated as a Fellow of the Nigerian Institute of Building (FNIOB) for his unquantifiable contributions to the growth and development of the building industry.

Governor Inuwa Yahaya who was visibly elated by the honour as FNIOB noted that Nigeria would have been better off if policies regarding regulatory development are implemented through the stipulated channels.

Governor Inuwa Yahaya remarked that his government equally instituted a committee on land administration and management wherein lands that are meant for public, industrial and residential buildings are reviewed and reverted back to their original purposes.

The Governor revealed that the Gombe State Government through the committee on land administration and management has created a lay out to compensate individuals affected by either mis-allocation or double allocation.

The Governor said such ignoble practices pose a serious challenge not only to the people but also to the leadership, saying leaders in various capacity must work together to take Nigeria out of the current quagmire.

Governor Inuwa Yahaya revealed that despite being a fellow of some professional institutes and associations in the country, that of the NIOB is dear to him considering his long dealings with the building industry.

While pledging his administration’s support to the institute, the Governor said “The honour is not done to me alone but the entire people of the State, especially members of the my cabinet who work day and night to bring about the prevailing socio-economic and infrastructural development in the State.”

Earlier speaking, the President of the Nigerian Institute of Building, Professor Yohannah Izam said they were in the State to decorate the Gombe State Governor as FNIOB for his administrative perceptivity towards the development of associated environment that enhances quality housing as well as for his contributions to the growth and development of the built society.

He used the investiture ceremony to pay special tribute to Governor Inuwa Yahaya over his sagacity in developing social, economic and infrastructural dimensions of State such as the multi billion naira Muhammadu Buhari Industrial park, the network 11-100 road project among others.

He also praised the governor for maintaining the peace in the state, which he noted, facilitated the emergence of Gombe as number one in ease of doing business ranking.

The President of the institute however appealed to Governor Muhammadu Inuwa Yahaya to upgrade the physical planning laws of the State so as to be in tandem with global best practices.

It will be recalled that Governor Inuwa was recently conferred with a fellowship award by the the Nigerian Institute of Building during the Builders Conference/Annual General Meeting, which took place in Akure, Ondo State.