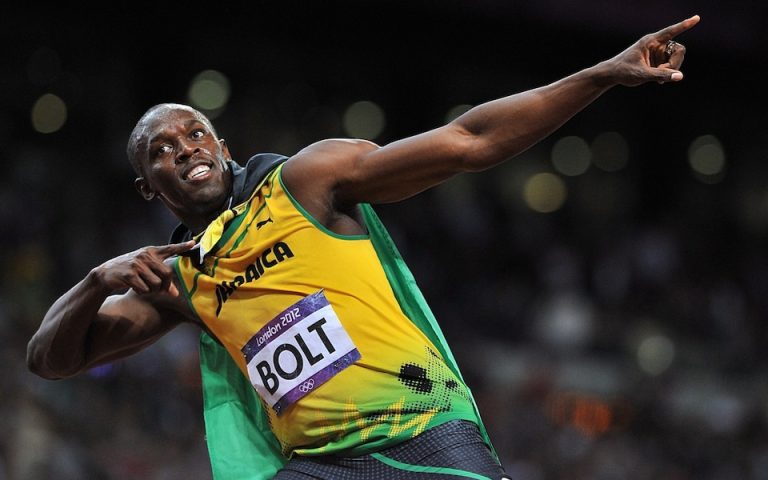 Usain Bolt has become the latest sportsperson to attempt to trademark a logo of his signature victory celebration pose for business in the United States of America.

The Jamaican track legend used to celebrate by leaning back and gesturing toward the sky, also known as the two-hand lightning salute.

The eight-times Olympic champion has submitted an application to the US Patent and Trademark Office for an image that depicts the iconic ‘Lightning Bolt’ move in which he leans back with one arm bent and the other pointed towards the sky.

Bolt, who still holds the world records for the 100m and 200m and was the unbeaten Olympic champion in those events between 2008 until 2016, is now retired but evidently hopes to cash in on the instantly recognisable gesture for various merchandise and branding.

According to reports, Bolt is looking to start a new clothing and accessories brand under the iconic logo.

The 36-year-old filed his application on 17 August, to protect the logo showcasing his signature victory pose and has already submitted the application.

The filing indicates the fastest man in history will use the distinctive stance to market a range of products including sunglasses, jewellery, bags, and sporting goods, as well as restaurants and sports bars.

Josh Gerben, a Washington DC-based trademark expert, told Bloomberg: “The list is relatively extensive. The logo could be licensed, or he could make those products himself.”

He previously applied to register a similar trademark 12 years ago, but this has since lapsed after going unused.

Gareth Bale and Sir Mo Farah have both previously also moved to trademark a celebration logo. Farah’s ‘Mobot’, where he places both hands on the top of his head to create an outline of the letter ‘M’, became famous during the London 2012 Olympics when he won gold medals in both the 5,000m and 10,000m.

Cristiano Ronaldo also has his own range of CR7 branded merchandise that includes watches, sunglasses, underwear and aftershave.