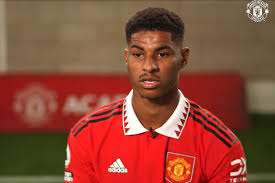 Marcus Rashford has praised Manchester United’s ability to be versatile during the club’s terrific 2-1 win over Liverpool on Monday night.

Manchester United got their Premier League campaign up and running with a 2-1 win over rivals Liverpool, who really underperformed at Old Trafford.

Jadon Sancho’s early opener was backed up by Marcus Rashford’s cool finish and while Mohamed Salah made Old Trafford nervous with a late consolation.

Manchester United coach, Erik ten Hag got his first competitive win to see his side leapfrog the Reds in the Premier League table.

Speaking after the match, Rashford hailed United’s ability to change tack when needed after Anthony Martial was introduced.

“I think it’s just the versatility we have in the team, we can do many different things, especially in attack,” he told Sky Sports.

“In the second half, probably slightly less clear cut chances but we did better with them and for us to be able to switch and chop and change positions like that is always a positive.”

Rashford started the game as the lead forward before being moved onto the left-hand side when the Frenchman – who was making his first appearance of the season following injury – came on at half-time, with Cristiano Ronaldo only brought on four minutes from the end.