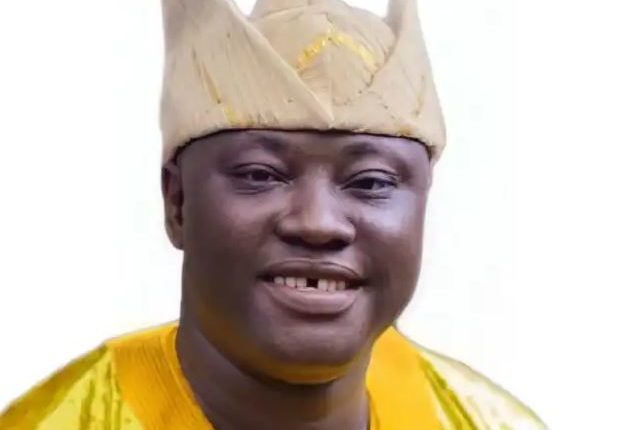 IBADAN, Nigeria (VOICE OF NAIJA)- There is an ongoing crisis on Alaafin of Oyo’s stool following the demise of late monarch, HRM Lamidi Olayiwola Atanda Adeyemi III, who died at the age of 83 in April, 2022.

One of those aspiring to become the new Alaafin of Oyo, Prince Afolabi Ademola Adesina, has accused the Oyo state government of insincerity in the selection process of a new monarch.

Adesina who is from one of the ruling house – Adeitan Atiba Royal Lineage – said that the state government has ignored nine other ruling houses that had been enlisted since 8 December, 1976 by the then Oyo State Military Government.

He made these known in a statement released on Tuesday.

The statement read, “My attention has been drawn to a statement by the Oyo State Government to the effect that it will not interfere in the process of selecting a new Alaafin of Oyo.

“The state government reportedly said this through the Special Adviser to the Governor on Culture, Honourable Akeem Ademola Ige, during the celebration of the Sango Festival in Oyo.

“The report came to us as a rude shock as the process of choosing the Alaafin has already been infiltrated and segregated to the exclusion of other original sons of Alaafin Abiodun Atiba, the progenitor of Modern Oyo, by some agents of the Oyo State Government.

“The process of selecting a new Alaafin, which started with transparency by the Head of Oyo Royal Princes (Baba Iyaji) and Oyo Mesi in general has been since alterated by the agent of the government.

“The chairman of Atiba Local Government Area, in a letter dated 9 August, 2022, claimed that he has been directed by the state government, through the Oyo State Ministry of Local Government and Chieftancy Matters, to commence the process of picking a crown prince from the Agunloye Royal House.

“This is being done in exclusion of the other nine ruling houses that have been enlisted since 8 December, 1976 by the then Oyo State Military Government and Gazetted, viz the 1995 White Paper, on 16 July, 2001 by the state government during the administration of the late Governor Lamidi Onaolapo Adesina.

“The chairman of Atiba Local Government Area in the letter, dated 9 August, 2022, through the Director of Administration and General Services, Alhaji Ayoola A.A, relied on the Oyo state Chieftancy Law of 1961 which had been declared defective since 8 December, 1976 because it is not consistent with the Customary Law governing the appointment of the Alaafin of Oyo or any oba in Yorubaland.

“In the letter, the local government chairman, directed Baba Iyaji to liaise with Agunloye family to choose a Crown Prince and present him to the Oyo Mesi, through High Chief Yusuf Ayoola, the Basorun of Oyo.

“With due respect to our Acting Governor, Chief Bayo Lawal and our darling Governor Seyi Makinde (in absentia), the directive is contrary to the claim by your aide that the Oyo State government will not interfere in the process of selecting a new Alaafin.

“What more can demonstrate the fact that the state government has, indeed, interfered in the selection process? How else can you prove that you are not interfering in the process?

“Sir, what you have done, through the letter by the chairman of Atiba Local Government Area, shows that you have, indeed, totally hijacked the process. You can only prove to us by publicly disowning the letter.

“As an unbiased umpire, we expect that the state government will call for the publication of all the 119 princes that applied for the vacant Royal Alaafin Stool and the criteria for the selection process to be made public.

“This should be done in line with our tradition and also allow the Oyo Mesi to evaluate each and every applicant, based on the culture of Oyoland. I am aware that Baba Iyaji has submitted all the applicants’ letters to the Oyo Mesi, through the Basorun of Oyo.

“We are hereby appealing to the Oyo State government to allow for a free and fair selection process to give us a new Alaafin that will be acceptable to and who will stand for all and sundry.”