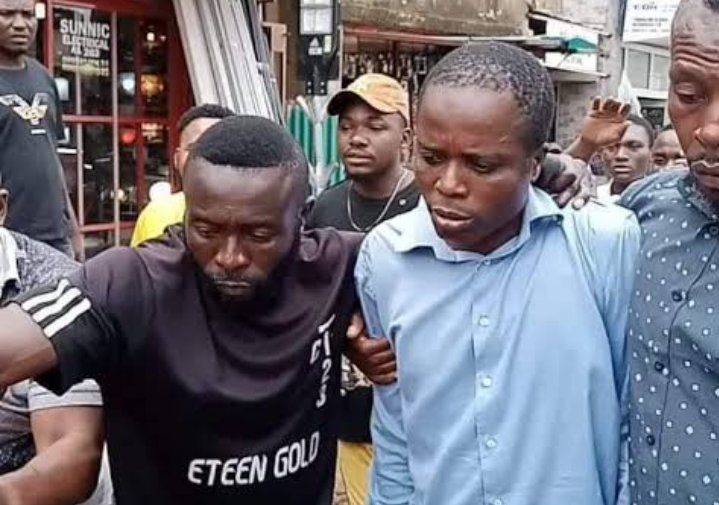 IBADAN, Nigeria (VOICE OF NAIJA)- Mob attacked one of the clerics who attended the unveiling of Kashim Shettima, as the vice-presidential candidate of the All Progressives Congress (APC), in a market in Abuja.

In a video that went viral on appeared on social media showing how a man, whose facial appearance appeared to resemble one of the clerics who attended Shetttima’s unveiling, was being manhandled by a mob in a market.

In the video, the man was seen protected and escorted by some men suspected to be security operatives amid a crowd of angry people who were directing insults at him.

In the video, some people were heard chanting, “fake bishop, Tinubu bishop, see one of the bishops Tinubu used”.

According to reports, the man came to Dei-Dei market, a popular market in a suburb of Abuja, to buy materials for plumbing works before he was attacked by the mob.

The incident has sparked outrage on social media.

Reacting to the video, Omoyele Sowore, presidential candidate of the African Action Congress (AAC), described the attack as “unacceptable, barbaric and criminal”.

“I was particularly shocked that some highly respected persons on Facebook/WhatsApp and elsewhere celebrated this mob justice against this particular Nigerian,” Sowore said.

“Since the advent of this election cycle we’ve seen and observed a heightened level of harassment of citizens via death threats, arson threats, verbal and now physical abuse against those who happen not to support Peter Obi’s candidacy.

“A Catholic Church pastored by Rev Fr. Ejike Mbaka known as Adoration Ministry was a victim of this mob action, Femi Kuti’s African Shrine in Lagos was at the receiving end of arsonists over his refusal to support Mr. Obi for President.

The Cable cannot independently verify if the man spotted in the video is one of the clerics who attended the APC event.

The Muslim-Muslim ticket had elicited criticism from some Nigerians who described it as an “injustice” to the Christian community.

On 20 July, Shettima was unveiled as Tinubu’s running mate at Shehu Musa Yar’Adua Centre in Abuja.

The major highlight of the event was the presence of some persons robed in attire unique to Christian clerics, who came to show support for the APC vice-presidential candidate.

The incident elicited criticism as the Christian Association of Nigeria (CAN) distanced itself from the clerics, saying “artisans” were hired to act like clerics.

A former media assistant to former President Goodluck Jonathan, Reno Omokri complained consistently that the life of his one year old daughter was repeatedly threatened.

“Obi’s supporters are not alone in this unconscionable act, a disabled Obi supporter was reportedly beaten for displaying his paraphernalia.

However, Obi’s campaigners have demonstrated the most amount of intolerance and harassment of his opponents.”