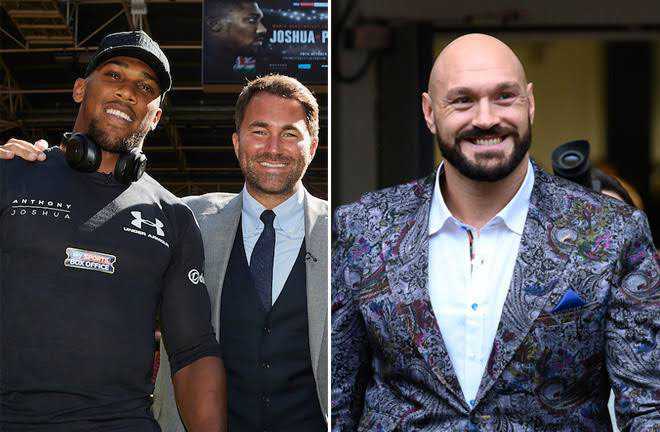 Eddie Hearn has slammed Tyson Fury for kicking a ‘crying’ Anthony Joshua when he was down moments after AJ’s loss to Oleksandr Usyk.

WBC heavyweight boxing champion, Tyson Fury had boasted that he would beat both Anthony Joshua and Oleksandr Usyk in one night after watching their heavyweight titles rematch on Saturday night, 20 August.

Joshua lost to Usyk in Saudi Arabia, effectively handing the WBA, IBO and IBF titles to the Ukranian who came out tops on the night.

It is expected that Usyk will now proceed to fight Fury for the undisputed heavyweight championship of the world and unify all four belts.

But Fury, also known as Gypsy King, who is still undefeated as a professional boxer, was not impressed by both heavyweight fighters, insisting that both will be easily beaten by him.

He took to social media to say; “After watching that, the both of them were s***e.

“It was one of the worst heavyweight title fights I have ever seen.

“I annihilate both of them on the same night.

“Fing se. “Get your f***ing cheque book out, because the Gypsy King is here to stay, forever!”

Reacting to Fury a.k.a Gypsy King’s comments, AJ’s promoter, in a press conference after the match, captured by Boxing King Media, said his words were not useful at a time when AJ was still emotionally recovering from the defeat.

“You saw the reaction of the guy there,’ the boxing promoter said, in relation to AJ’s emotional reaction after the fight. ‘Tyson Fury openly says he’s had all these mental health problems, struggles, stuff like that.

“You see a guy out there crying, as big and strong as AJ. For years, he’s put on a brave face. Tonight, like he said, you just saw chinks in the armour.

If you want to a guy who’s been through this “mental health” experience, and goading someone when they’re down and they’re devastated, that shows you the kind of man he is.”

In a seperate comment, Hearn lashed out at negative social media commentators on a wider scale, stating: ‘”If you’re a troll, that means you’re a complete and utter low-life scumbag. You don’t have to say anything to the trolls.’

Hearn explained that he thought Usyk was a deserved winner, edging his own personal score card after a stunning final three rounds.

“I gave Usyk 10, 11, and 12,’ Hearn said. ‘What Usyk did in the tenth round was unbelievable, cause he was battered, he was hurt, and he said ‘I need to come out like a train and throw loads of punches’.’

He felt AJ’s post-match comments were born out of ‘frustration‘, noting that AJ was ‘devastated‘ following the result, and going through the fight with his Mexican coach Robert Garcia.

Hearn added: ‘People for years have said ‘We never get to see the real AJ, he never shows enough emotion’. Well now he did. He left the ring because I thought ‘I’m going to do something stupid here’. Then he got out the ring, and thought ‘I can’t leave the ring, because it’s not the right thing to do’. Then he came in and gave a quirky speech. It was just someone who was desperate to win.

“He boxed a good fight. He tried, he gave it everything, he emptied the tank. In the 10th, 11th, 12th, he was still in there, he was taking shots and carrying on. I don’t know what he has to do to get respect. What’s the point in chasing it?

“24 rounds with the pound-for-pound number one. He lost the first fight, he wasn’t in the fight. He was in the fight tonight, it looked like there were times where he could have won the fight. It was the brilliance of Usyk in the championship rounds.

“I told him, ‘You lost a split to the pound for pound number one’. There’s plenty of fighters you’re gonna steamroller. “

Hearn also said he may work with the Ukrainian fighter again, after two massive showdowns with AJ in the past 12 months.

“I think we’ve done an unbelievable job for him,’ Hearn told reporters. ‘I said to him the other day ‘How good is the job I’ve done for you?’ and he said ‘Unbelievable’, so we’ll see. But this is where my heart is.’

The Dagenham-born promoter said that his reaction to this fight was much better than his feelings after last September’s initial match-up between Usyk and AJ.

“I was frustrated last time, and I’m proud this time,’ Hearn said. ‘I felt like last time, he [AJ] could have done more, but tonight, he left it all in the ring. I don’t know what else you can do.

“You talk about getting respect from people. If you give it all your all, how can you not get the respect of people? It wasn’t like he finished the fight and he was trying to survive, he was swinging, he was taking the kitchen sink, and he stayed on his feet.’

“Whatever you think of Anthony Joshua, even if you don’t rate him, he’s a top five heavyweight in the world. It could be worse, couldn’t it? I know you wanna be number one, but you’re a great heavyweight, and you’re going to improve off that experience.”