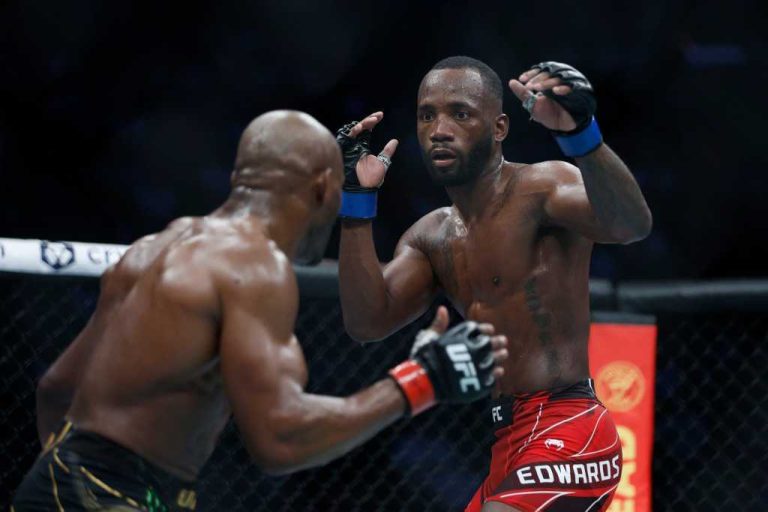 The fight looked to be heading for the same conclusion as Usman overcame a tricky start to stamp his authority on the main event.

However, Edwards refused to be counted out and connected with a stunning head kick in the final round to leave Usman prone on the canvas as referee Herb Dean immediately waved the fight off.

Usman, nicknamed the Nigerian nightmare, is adjudged as the number one pound-for-pound fighter.

He was looking to make the sixth defence of his title in a rematch against Edwards, and he appeared to be making progress until he was dealt the last-minute kick that left him in the cold.

Seven years ago, Usman outpointed Edwards as part of what became a 19-fight win streak for the ‘Nigerian Nightmare’, earning him the title of UFC’s pound-for-pound king.

Edwards also came into this on an undefeated streak, winning nine bouts in a row, while patiently waiting for his first title shot.

The Jamaica-born Briton, however, avenged his loss to Usman in 2015, leaving Utah as welterweight champion after landing a vicious kick that sent Usman sprawling to the canvas with just seconds left of their five-bout clash.

“You all doubted me that I couldn’t do it,” Edwards said in the cage after the fight. “Look at me now. Look at it: pound-for-pound, headshot, dead. That’s it.

“I told you, mum, I’d change our lives. World champion, world champion, look at me now. I was born in Jamaica with nothing. I lived in a wood shack with a zinc roof.”

Reflecting on the fight, UFC president Dana White said: “I thought Usman fought the perfect fight… I was listening to the commentary and Rogan and Anik and DC were dead on with everything they were saying Edwards should have been doing and needed to do, and as soon as they said it he landed the head kick.

“You think of everything that was on the line for Usman tonight, and Usman fought with total confidence, he fought the perfect fight. It might not be the most fan-friendly style but he was landing big shots to the body, big shots to the head, he couldn’t have fought a more perfect fight until the last minute.

“It’s what makes this sport the best sport in the world, that you can sit through four rounds and four minutes and that can happen, anything is possible in this sport. There are no lop-sided or ones-sided fights, anything his possible. I said people wouldn’t give Leon enough credit, he was a dangerous opponent.”

White also confirmed Edwards will defend his belt against Usman in his next fight with the promotional boss set on bringing the bout to England. It would be the first UFC title fight in the country since Bisping beat Dan Henderson in Manchester in 2016.