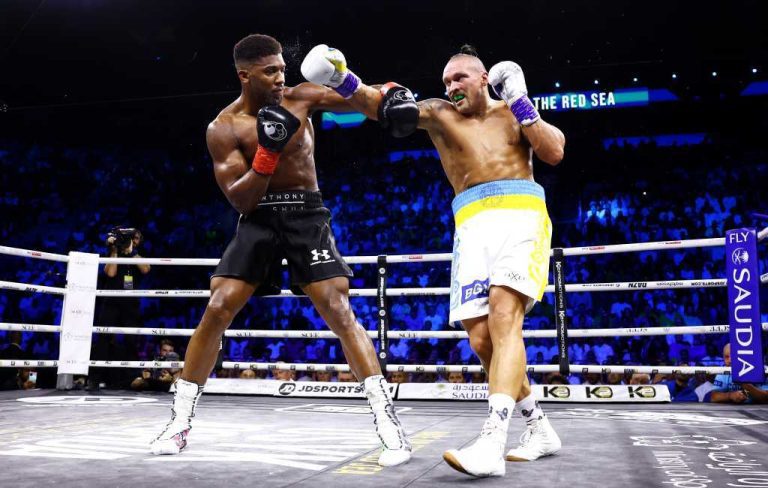 IBADAN, Nigeria (VOICE OF NAIJA)- Former heavyweight champion, Anthony Joshua stormed out of the ring and almost left the arena after losing to Oleksandr Usyk in their rematch on Saturday night, 20 August, 2022.

A back-to-back defeat in the hands of Oleksandr Usyk has dragged Joshua’s reputation in the heavyweight world to the slaughterhouse, leaving the 32-year-old frustrated after the Saturday night rematch in Jeddah, Saudi Arabia.

The Nigerian-British boxer lost by a split decision of 115-113 in his favour, then 115-113 and 116-112 in favour of the 35-year-old Ukranian. Although AJ displayed much improved tactics in Saudi compared to his frosty outing in Tottenham 11 months ago, his skills fell short of Usyk’s to reclaim his unified WBO, WBA and IBF heavyweight titles.

Anthony Joshua didn’t seem to take his defeat to Oleksandr Usyk in their second meeting very well as he stormed out of the ring and almost left the arena after the result was announced.

A livid Joshua had asked Usyk, “You’re not strong, how did you beat me? I had character and determination.”

“If you knew my story, you’d understand the passion. I’m not an amateur boxer. I was going to jail and I got bail and I started training. If I got sentenced, I wanted to be able to fight.

“It shows the passion we put into this. For this guy to beat me tonight, it shows the levels of hard work he must have put in so please give him a round of applause as heavyweight champion of world.

Before the rematch, some pundits had described the fight as a decisive moment that would make or mar Joshua’s illustrious boxing career.

Joshua also realised how crucial the fight was to his future and did all he could to redeem his fate. He changed his long-time coach and trained harder, but those efforts weren’t enough to let him scale through on Saturday.

Attempting to explain how he felt, AJ faltered as he choked back tears, holding his head in his hands.

“I don’t feel anything,” he said at first, trying to come to terms with the effect of the loss, before he had to admit, “I’m upset deep down in my heart,” Sky Sports quoted him as saying.