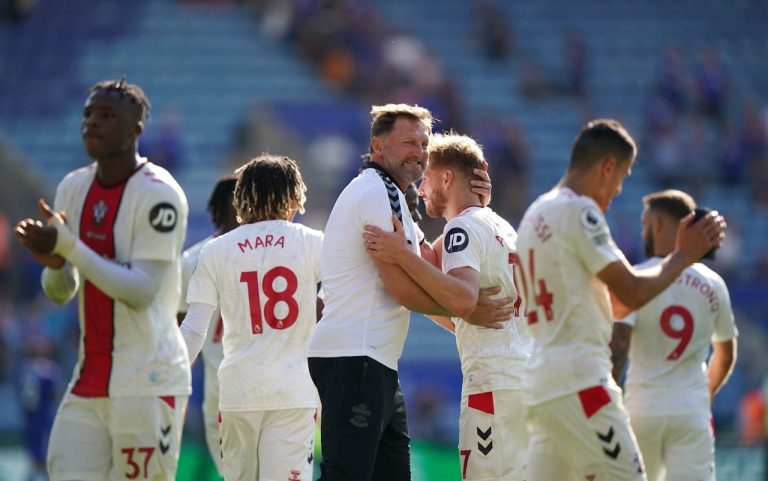 Wilfried Zaha proved himself as the man of the moment after scoring a brace to help Crystal Palace to a 3-1 victory over Aston Villa.

Only Tottenham duo Heung-min Son and Harry Kane have scored more Prem goals than Zaha in 2022.

Palace and Zaha had to fight back from a slow start, however.

Leon Bailey, one of three Aston Villa changes, played a key role in the early opener, his deft header directing Tyrone Mings’ long ball through the Palace defence and into the path of Watkins.

The England striker had timed his run perfectly and fired a first-time finish low past Vicente Guaita to open his account for the season.

Steven Gerrard’s side got off to an electric start with Ollie Watkins giving the visitors the lead inside five minutes, however just two minutes later Zaha pulled clear and slotted home to draw the game level.

Palace were then awarded a penalty thanks to a Lucas Digne handball, giving Zaha the chance to give the Eagles the lead.

Despite seeing his penalty saved, the Ivorian forward converted the rebound before staring down Emi Martinez in the Villa goal to let him know who is boss before Jean-Philippe Mateta wrapped up the win.

Frank Lampard will be breathing a sigh of relief this evening after seeing his Everton side secure a 1-1 draw against Nottingham Forest.

The Toffees looked like they were in line for a third defeat in a row when Brennan Johnson opened the scoring late in the first-half.

Demarai Gray got the Merseysiders out of jail with a cool finish following a lofted ball forward from Jordan Pickford.

A long ball over the top from Everton goalkeeper Jordan Pickford found Gray in stride, and after an exquisite first touch, the Toffees forward beat Forest ‘keeper Dean Henderson for the equalizer. Everton pushed hard for a late winner, but the visitors held on for a deserved point.

It was the first point of the season for Everton, who were playing their third match, while newly promoted Forest tacked on a fourth point. If the pre-season projections are any indication, that could be a massive result in the race to avoid relegation.

Everton started the match strong and created a host of opportunities, but Henderson was sure-handed in goal for his latest standout performance in a Forest shirt.

After weathering the early storm, the newly promoted side grew in confidence as the match progressed, and Taiwo Awoniyi had a chance inside the Everton box, but he could not get the ball past Pickford.

Awoniyi was replaced in the second half by new £42.5 million ($50m) signing Morgan Gibbs-White who made his debut. But it was another substitute, Ryan Yates, who fired the shot that led to a rebound which Brennan Johnson put home in the 81st minute for the momentary 1-0 lead.

With Everton’s attack looking anemic over the course of the match, it looked like Nottingham Forest would come away with all three points before the direct play from Pickford found Gray to send Goodison Park into delirium.

Aleksandar Mitrovic got the last laugh at Craven Cottage by scoring the winner in a 3-2 west London derby victory over Brentford.

After taking a 2-0 lead, Brentford found a way back into the match through Christian Norgaard and Ivan Toney who enjoyed celebrating the goal by mimicking Mitrovic’s trademark celebration.

But it was the Serbian star who was the hero of the day as he earned a first victory of the season for Marco Silva’s side.

With Leicester unable to spend money due to issues with Financial Fair Play, the future of Fofana could be intrinsically linked to Rodgers’s hopes of strengthening his squad this month.

Chelsea have seen two bids for Fofana rejected and will have to pay a world record fee of £80 million to sign him.

Fofana was sat in front of the press box for this game while Tielemans, a summer target for Arsenal, started on the bench.

Southampton were struggling to get out of their own half, with Hasenhuttl frequently throwing his hands up in the air as counter-attacks broke down.

Leicester finally made the breakthrough with their first shot on target nine minutes into the second half.

It was a wonderfully taken free-kick from James Maddison, swerving the ball into the bottom right corner with Bazunu unsighted.

Southampton were now on the front foot, making three separate appeals for penalties in as many minutes as Leicester were finally subjected to pressure.

An equaliser appeared inevitable and it came in the 68th minute from Adams, sliding the ball in from eight yards after Armel Bella-Kotchap’s lay-off in the area.