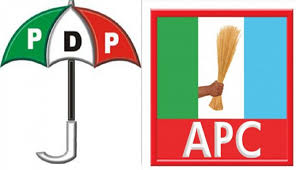 ENUGU, Nigeria (VOICE OF NAIJA)- The Rivers State chapter of the All Progressives Congress (APC) on Thursday, dragged the Independent National Electoral Commission (INEC) and the Peoples Democratic Party (PDP) to court in two separate suits.

This comes after the PDP had filed a suit before a Federal High Court in July, to seek the non-recognition of APC candidates for the National Assembly election by INEC, because the electoral body did not monitor the primaries, among other alleged discrepancies.

The APC in one of the suits filed by the APC on Thursday, marked, FHC/PH/CS/162/2022, prayed a Federal High Court in Port Harcourt to disqualify the Governorship candidate of the PDP, Siminialayi Fubara, from contesting the election over allegations that his party erred on some provisions of the new electoral act.

In the second suit, with number FHC/PH/CS/163/2022, the party is seeking the powers of the court to disqualify all 32 candidates of the PDP for the State Assembly elections for same reasons.

The reasons are that the PDP delayed in forwarding the register containing the names of their candidates to the Independent National Electoral Commission within thirty days as required by law.

The APC also alleged that the party did not properly sign the letter containing the names of the candidates before forwarding it to the electoral umpire.

However, when the matter was mentioned in court today, counsel to the APC, C.C. Dike moved a motion exparte for a substituted service.

The Presiding Judge, Justice Ayuah Phoebe granted the request, and adjourned the matter to 31 August for hearing.

The PDP in July filed a suit challenging the National Assembly primaries conducted by the APC in Rivers State, alleging that the exercise was not monitored by the Independent National Electoral Commission, among other alleged infractions.

The case was last heard on July 25 and adjourned till August 29 following the request by the lawyer to the PDP for more time to respond to some processes.

Before that adjournment, the APC Candidate for Ikwerre/Emohua Federal Constituency, EZEMONYE EZEKIEL-AMADI, who appeared for himself made unsuccessful attempts to notify the Judge of a pending application.

Earlier today, The National Assembly Candidates of the All Progressives Congress in Rivers State met at the state secretariat of the Party in Port Harcourt to demand that the judge handling the PDP’s case against them, Justice Stephen Daylop-Pam recuses himself from handling the case.

Speaking for all the sixteen defendants in the PDP’s suit, except INEC, the candidate for Ikwerre/Emohua Federal Constituency, EZEMONYE EZEKIEL-AMADI accused the Judge of having the tendency of being bias due to his relationship with the Peoples Democratic Party and its leader, Governor Nyesom Wike.

“It may not be possible for us as responsible citizens to publicly revel or divulge all we know about the relationship between Justice Pam and Governor Nyesom Wike, the leader of the PDP in Rivers State, as well as all that we know today, that transpired in the VAT case between the Rivers State Government and the FIRS”.