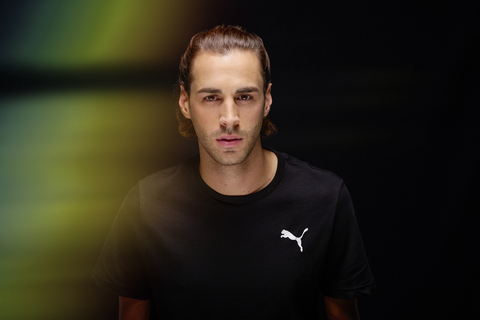 Six years after his first gold medal, Tamberi takes back the European title and speaks about his motivation to keep performing at the highest level in a video interview with sports company PUMA.

With the ‘Only See Great’ campaign, PUMA explores the career path of its brand ambassadors, as they talk about their own pursuit of greatness, listening to their hearts, and finding a vision that no one else can see.

In the interview, Gianmarco talks about his very first successes and extraordinary performance at the Olympic Games in Tokyo.

“That feeling that I had that day, that happiness I couldn’t even imagine that could exist. It’s something that was coming out of my body. My heart was exploding.”

Tamberi really showed what the Olympic spirit is about when sharing first place. For him it felt just natural. “If both can go back with the happiness? With the proudness of what they have done. It’s much better. We didn’t even think one moment that it would have been different the end, so I will never regret that decision. We will remember it forever and I’m sure we will not be the only two people remembering it.”

The idea for PUMA’s “Only See Great” campaign was inspired by cultural icon, entrepreneur and philanthropist Shawn “JAY-Z” Carter who first said: “I only see great. I don’t see good. I don’t see compromise. We should always strive to make something great, something that will last.”

PUMA
PUMA is one of the world’s leading sports brands, designing, developing, selling and marketing footwear, apparel and accessories. For more than 70 years, PUMA has relentlessly pushed sport and culture forward by creating fast products for the world’s fastest athletes.

PUMA offers performance and sport-inspired lifestyle products in categories such as Football, Running and Training, Basketball, Golf, and Motorsports. It collaborates with renowned designers and brands to bring sport influences into street culture and fashion.

The PUMA Group owns the brands PUMA, Cobra Golf and stichd. The company distributes its products in more than 120 countries, employs about 14,000 people worldwide, and is headquartered in Herzogenaurach/Germany.
View source version on businesswire.com: https://www.businesswire.com/news/home/20220819005125/en/