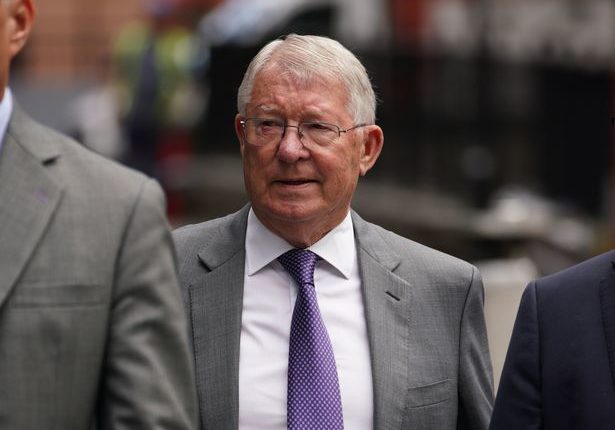 Ferguson was manager of Man Utd for 27 years and signed Giggs for the club as a schoolboy.

Ferguson was in attendance as the former Manchester United winger stands trial for allegedly assaulting his ex-girlfriend Kate Greville.

The 48-year-old retired football player is alleged to have headbutted Greville at their home in Worthing on November 1, 2020, as well as assaulting her sister Emma.

He is also accused of using controlling and coercive behaviour towards Greville during their six-year relationship. He denies all charges.

Questioned by Giggs’ barrister Christopher Daw QC, Ferguson said: “He [Giggs] was 13 years of age when we first got to know about Ryan, he was playing for Deansgate and training at Manchester City. We worked hard to get him to come to the Cliff [United’s then-training ground].

“He came with his father on one occasion, we started visiting his house to get him to come to Manchester United.”

He added: “Ryan was a quiet boy, he sat there quietly while his mother had done all the talking, asked about his ambitions for the club, [the club] had been through a bad time. We had a big job to do… It was important we tried to get him signed by his 14th birthday… His other club Manchester CIty were also trying to do that.”

Ferguson continued: “We and my assistant went to watch the young boys coming through, the important time is when they become an apprentice because that’s when you become in control of them…”

“When he was 17 he came into the first team and that’s when we really had to think about looking after him,” he added.

“The thing was the press, the media started comparing him with George Best and we had to face a lot media attention on the boy. I said to his mother I’ll look after him, if anyone came to him from the media they would have to come through me.

“If someone says you’re the next George Best it’s a big issue the boy was great, there was no trouble and if media wanted to come to him to do articles they had to come through me.”

Asking about Giggs’ relationship with women, Daw said: “He was a player who had a number of girlfriends and lady friends as his life progressed.”

Ferguson said: “At that stage I don’t think there was anything… When we had dinners at the end of the season he would bring friends with him yeah.”

Speaking about their time working together, Ferguson said: “When he got over the issue of the dressing room I used Ryan a lot in the sense of when I lost my temper about performance I would use Ryan as an example. Sometimes he got the sharp end of my tongue but he was strong enough and could take it. Everyone else would think ‘If Ryan Giggs can take it I can take it’.”

Ferguson said: “Fantastic temperament, wonderful temperament. To have the career he had in a difficult position he had to have a good temperament…

“Best example I had in the club, everyone looked up at Ryan as the number one.”

Daw asked: “Did you ever see him lose his temper?”