We’ll Not Succumb To Demands Of ASUU, No Work, No Pay- FG 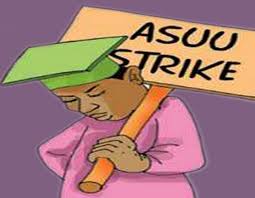 IBADAN, Nigeria (VOICE Of NAIJA)- The Federal Government of Nigeria has insisted that it will not succumb to the demands by the Academic Staff Union of Universities, ASUU, for their members to be paid the six months salaries withheld over the ongoing strike

The Minister of Education, Mallam Adamu Adamu, stated this when he appeared at the ministerial briefing organized by the Presidential Communication Team, at the presidential villa, Abuja.

Mallam Adamu flanked by the Minister of State, Goodluck Opia explained that not paying the backlog will deter others who may contemplate strike in future.

He said that the three university-based unions that are on strike have accepted to call off the strike in the next one week, except ASUU that had remained adamant insisting that its members should be paid the five months that their salary was stopped.

He said the strike by the university-based unions came despite the trillions of naira expended on education by the present administration directly as well as by agencies such as TEFFUND and UBEC.

He stated that government rejected ASUU’s demand to be paid the salary backlog because it believed that there has to be penalties for their action.

He, however, noted that ASUU had begun consultations with their members to determine whether to call off their strike as well.

Adamu informed that the University Peculiar Personnel and Payroll System, U3PS, and the University Transparency Accountability Solution, UTAS, outscored the Integrated Personnel Payroll and Information System, IPPIS, during the integrity tests conducted by NITDA, affiming that ASUU ‘s peculiarities will be accommodated in whatever platform that may me adopted.

He further said that currently the IPPIS has been made to accommodate the issue of sabbatical for lecturers.

He also debunked the report that UTAS had not been approved by government as the payment platform for university teachers.

He said that the government had proposed a new salary to the unions, which he said the Senior Staff Association of Nigerian University, SSANU; the Non-Academic Staff Union of Universities and Allied Institutions, NASU, and the National Association of Academic Technologists, NAAT, have accepted in principle.

He, however, commended the Academic Staff Union of Polytechnics for calling off its own strike.