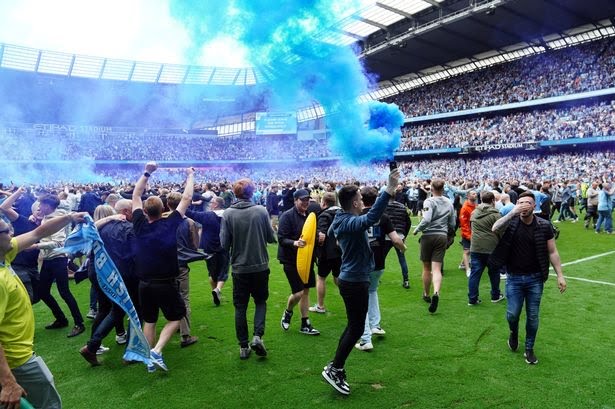 The FA issued the charge on Thursday, August 18, giving the English club seven days to respond.

The FA also released a statement that said: ‘It is alleged that after the final whistle of this fixture that Manchester City failed to ensure that its spectators – and all persons purporting to be its supporters or followers – conducted themselves in an orderly fashion and refrained from using threatening and/or violent behaviour whilst encroaching onto the pitch.’

The charge came after supporters ran onto the pitch following City’s victory over Aston Villa on the final day of the 2021-2022 Premier League season.

After the final whistle, thousands of Manchester City fans made their way out onto the pitch as they won their fourth Premier League title in five years by beating Villa 3-2 at home.

During the pitch invasion, Villa goalkeeper Robin Olsen was assaulted.

Speaking directly after the incident, the Greater Manchester Police department said they were investigating a number of offences, including criminal damage.

They released 23 images of potential suspects who they felt had ‘put spectators’ safety at risk’.

A police spokesman said: ‘Inquiries into the reported assault of a player on the pitch after the final whistle are ongoing with officers working in partnership with both football clubs.’

Meanwhile, Manchester City have promised to issue a lifetime ban to the supporter who assaulted Olsen after the game.

When asked at the time if his squad made it back into the changing rooms without any issues, Villa boss Steven Gerrard said: ‘No, my goalkeeper was attacked.’