Everything Attributed To Tinubu Is A ‘Bundle Of Lies’- Bode George 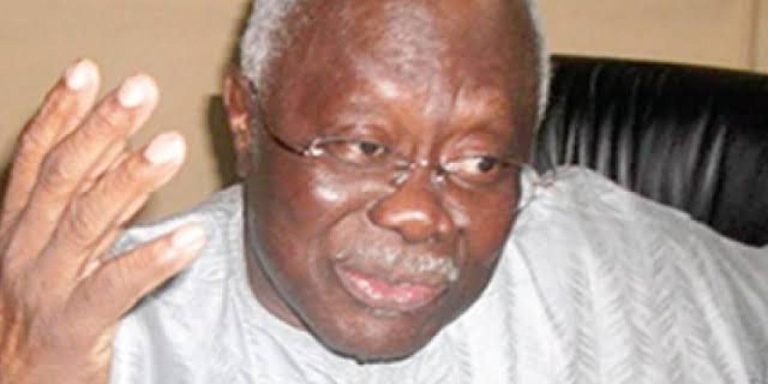 LAGOS, Nigeria (VOICE Of NAIJA)- A chieftain of the Peoples Democratic Party, Bode George, has questioned the Presidential candidate of the All Progressives Congress, Bola Tinubu, saying everything attributed to him is a “bundle of lies”.

George During  an interview on Channels TV on Thursday said Tinubu should tell Nigerians who owns Alpha Beta and how much the company has stolen from the country’s commercial hub, Lagos state.

“I absolutely have no qualms, no quarrel with this guy but all I know is that everything he has said he was or his name is this or his school is that, it’s a bundle of lies,” he said

“I’m a bonafide Lagosian, we knew what Lagos was like and Lagos remains the commercial nerve centre, not only in Nigeria but in the whole of West Africa. What has this fellow done to us?”

George also added that Tinubu, a former Lagos governor, despite serving for two terms in the state, did nothing to alleviate the pains of the people in the state.

“What has he done to alleviate the pains of the people of the state?” he asked.

He continued, “So when I listen to jokers talking that he has done so much, two-term governor and is there any governor there that has been there that was not handpicked by him?

“How much does he (Tinubu) take home as part and parcel of Alpha Beta? What’s going on? Everybody is pretending that doesn’t happen and you now want to entrust the resources of this nation to a man like that, a first-class clown who has mismanaged the resources of our people.”

Alpha Beta handles the computation, tracking and reconciliation of internally-generated revenue in Lagos.

Speaking on the crises rocking the PDP, George appealed to the Governor of Rivers State, Nyesom Wike and the presidential candidate of the party, Atiku Abubakar to calm down and not allow their ambitions to be bigger than the ambition of the party.

“All my appeal now is that Governor Wike should cool down, presidential candidate Atiku should also cool down because none of their ambitions should be bigger and higher than the ambition of our party.

“We are appealing to both of them because there’s no organisation anywhere in the world that will not have a crisis,” he said.