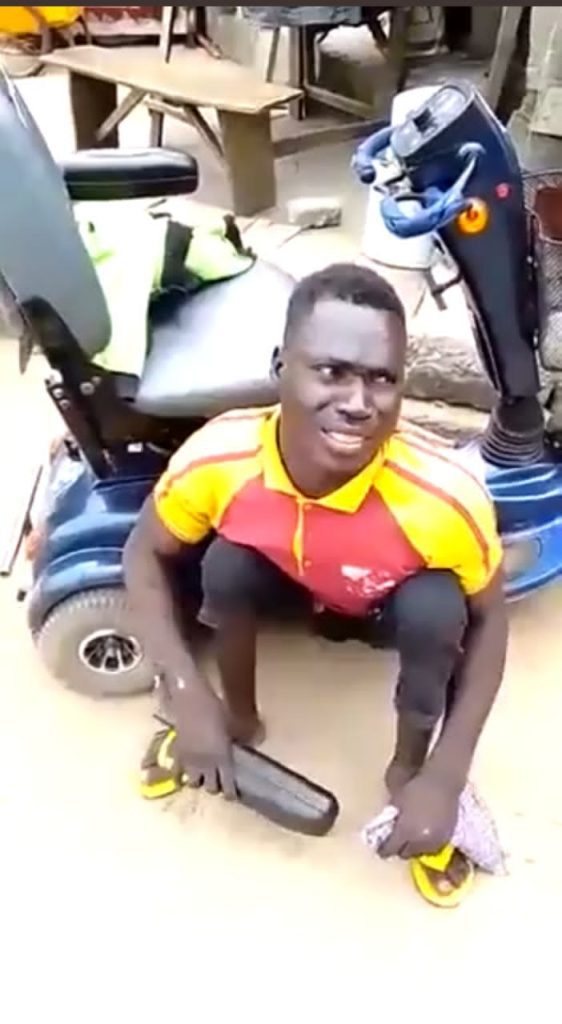 The supporter of the Labour Party presidential candidate, who is physically challenged “was doing lots of sensitization in his vicinity” when he was attacked by “agbado boys”.

Afam shared a video of the physically challenged man identified as John Solam, narrating the incident.

The Twitter user dubbed the attack as “barbaric” and said it should be “condemned“.

He tweeted on Thursday: “Bola Tinubu’s thugs attacked a physically challenged Northerner in Lagos. This is heartbreaking. This is barbaric and should be condemned. BAT should call his boys to order.

“His handle is @JohnSolam_. He has been doing lots of sensitization in his vicinity and agbado boys don’t like it. This is the same way Mr Rasak Olaitan Idowu was knocked down by agbado boys after his video supporting Peter Obi Presidency went viral.

“We have seen the likes of @Qdpaper2 threaten peaceful loving Obidents endlessly on this app, yet the likes of Volkswagen beetle, Reno & Ak-47 supplier keep projecting obidients as the aggressors. Where do we draw the line ffs? How do you even attack a physically challenged man?

“This constant intimidation of people in Lagos by thugs loyal to Bola Ahmed Tinubu has to stop. Lagosians shouldn’t be intimidated by thugs for their choice of candidate. Everyone has a right to choose their preferred political parties and candidate. Enough is enough!!!”

His tweets have garnered mixed reactions from Twitter users.

A tweep, @theenyola said: “So who wrote this bad script?

They broke his bike but didn’t remove the sign that provoked them?

We are a joke to you right?

Stop trying to stoke the ember of a non-existent war. Nobody is attacking anybody in Lagos.”

Another tweep, @idkelectrons wrote: “Tinubu had said he’ll “Fight Dirty”, thought he would’ve come out with fighter’s gear against anyone who opposes his aspiration.

Disappointingly, he has successfully made a mess of a good number of the Lagos Youths who now do not believe they’ll be better except being a #Tout.”

@tunarmania: “You all get to understand why Funsho Williams was mürdered before the Gubernatorial election in Lagos that made Tinubu the Gov of Lagos State in 1999.”

@emmyboy26: “Is like you guys don’t know how tribalistic some yourubas are. They hate Igbos with passion. In their record as long as you are not speaking Yoruba they call you Omo Igbo. They are everywhere scattered around Lagos.”