Benjamin Mendy: Victim Claims He Bragged About Sleeping With 10,000 Women As He Raped Her 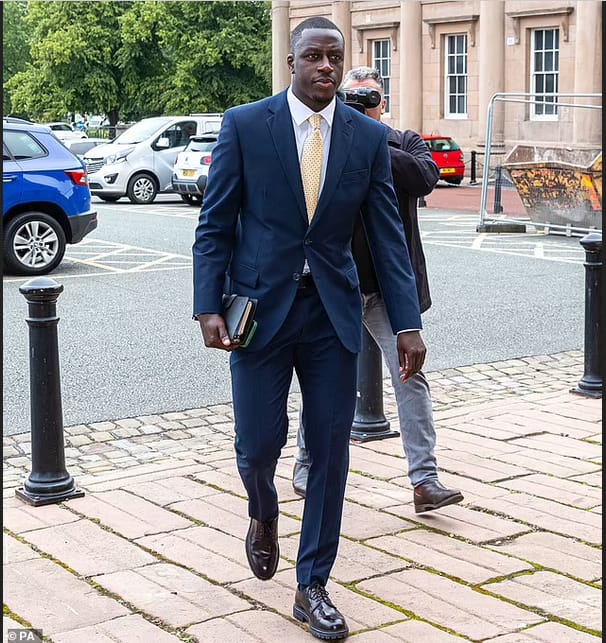 In a graphic testimony, one of his rape victims – a 24-year-old woman – revealed how she begged the £52million footballer before he allegedly raped her.

The woman revealed that she met Mendy at a restaurant called Panacea in Alderley Edge in October 2020 and that it was a Sunday evening.

Mendy was accompanied by three friends while she was with four female friends and they started chatting and drinking with the footballer’s group.

The woman revealed that at around 10.30pm as the restaurant was about to close, Mendy and his group invited them back to The Spinney, his mansion.

She told the court that she did not know that Mendy was a Premier League footballer when she first met him at the restaurant.

She was sitting in the basement of his home close to the swimming pool sending messages on Snapchat when Mendy snatched her phone from her.

“I was saying “that’s my phone, I want it back.” He was going through it looking at private pictures of me that I’ve sent before.

He saw pictures of my bum and was saying how much he liked it and he also said he liked my tits.”

The court heard how she had followed the 28-year-old French international into the room after he snatched her phone from her hands.

She said once inside, Mendy closed the door to the bedroom, which she told the court was fitted with a special locks and could only be entered using fingerprint technology.

The woman also told the court how Mendy bragged that he had had sex with ’10,000 women’ as he raped her.

Referring to Mendy’s bedroom, she said: “It was a big wooden door that had a black handle, like you have in a hotel. It had some kind of touch screen finger print thing on it.

“I followed him in to get my phone then the door shut behind me. I said listen, I want to go home, I don’t want to have sex with you.”

The woman revealed that once in the room Mendy asked her to remove her clothing.

She said: ‘He said he just wanted to look at me. He said: “I promise, I won’t touch you. I just want to see your tits.

“He said again, I promise, I just want to look at you. You can’t get out any way.”

The woman revealed that she reluctantly took off her clothes because she wanted to get her phone back and go home, she was just left standing in a thong.

Mendy then threw her mobile phone onto the bed and as she bent over to pick it up, the footballer grabbed her from behind.

She said: “He came around behind me and pushed me on the bed so I was on all fours.

“I told him: “No. I don’t want to have sex with you.” He said he would not touch me, he just wanted to feel me.

“I was on all fours with my bum in the air. He was pulling my bum towards him and I kept saying “I don’t want to have sex with you.”

The woman revealed that Mendy then moved her thong to one side and first raped her vaginally.

She said: ‘He moved my thong to one side and said that he wanted to put his tip in for a minute. I was trying to wriggle to get free but he had a hold of me. He kept on coming back.”

The woman’s evidence was video recorded and played to a jury of eight men and four women.

She said: ‘Then he started to put his penis into my bum. I said I don’t want to do that. I told him that my sister is waiting for me, I need to go, she’s probably looking for me.

‘He had his pants down fully, his top off and three diamante chains around his neck.

‘Then he said: “Put it (Mendy’s penis) in your mouth.” I put his penis in my mouth but I was trying to pull away.

Following the rape, the woman said that she put on her clothes and that Mendy left the bedroom.

She said: ‘I just wanted to stay calm, get out and not cause a scene. I just put on my clothes and went out.’

The woman told the court that she confided in her sister and a colleague about what had taken place at Mendy’s mansion and that she also referred herself to a rape crisis centre as she has suffered trauma.

The woman told the officer interviewing her at Macclesfield Police Station that after raping her three times, Mendy said to her: ‘Don’t tell anyone and you can come here every night.’

The woman provided details of Mendy’s bedroom, claiming that it was lined with wood, had an en suite bathroom and a large bed which had a blue and gold Versace pillow.

She said that Mendy was dressed in chocolate coloured trousers, a black top and was wearing three diamante chains around his neck.

Asked about the impact of the attack, she said: ‘The hardest thing is how many times I said no, it makes me upset. I felt petrified after it happened.’

Yesterday, one woman, giving evidence in the trial, said how Mendy ‘had a predatory look in his eye’ before exposing his penis and trying to rape her.

The woman said the footballer ‘pushed‘ her down onto a bed and tried to hold her on his lap.

Asked how she felt as Mendy was holding her down, the woman told the court: ‘Out of control. I was not in a place familiar to me. I was in a different territory and it was his.

‘He was surrounded by all his friends. I had no one else there. I kept saying ”stop” and ”no”. That was not heard and I felt a bit voiceless which is probably why I didn’t scream. I just had millions of questions.’